So, here we go with my inaugural post of the Horror Movie Guide Checklist. The first two listings in the book were a pair of Abbott & Costello flicks, the 1948 picture where they Meet Frankenstein and then Dr. Jekyll & Mr. Hyde five years later.

Full disclosure; I was never a Universal monster guy. I started consuming horror movies in 1979 so my Dracula & Wolfman were Jason and Michael. That's not to say I don't like appreciate those old films, I just didn't seek out titles from the silver era until much later in life. As for Abbott & Costello, I was partial to The Three Stooges as a kid so this may have been my first exposure to A&C beyond Who's On First? 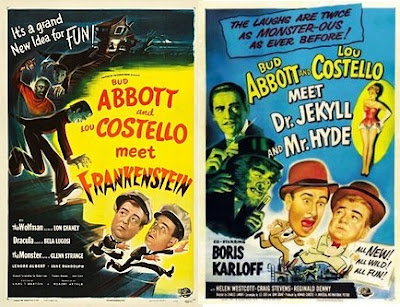 I enjoyed both movies and found them very amusing. I tried coming at it from the angle of how mind-blowing it must have been to have all these famous characters on-screen at once, much like Freddy vs. Jason, Alien vs. Predator, and more explosively, the MCU. I wonder, were there detractors upset that, formerly terrifying characters like Dracula and Frankenstein's Monster, were now being played for laughs. Not unlike Freddy in the last eighties.

I thought the difference the tone between the two pictures was interesting. I mean, sure they are goofy overall, but inversely. Frankenstein starts wacky and then gets darker. I sure didn't expect all the baddies to die at the end (except for the Invisible Man/Vincent Price cameo at the outset) and I was certainly shocked to see the female lead get pitched out a window to her doom. I also dug the old school animations, as well. And I'm going to assume that face-changing transition technique was still wowing audiences because they USED IT A LOT. In both movies.

Jekyll and Hyde was grim from the top with a man being killed in the street and then a subsequent brawl at a suffrage rally. Having those women's right activists moonlighting as burlesque dancers was sure a bizarre subplot. Shoehorned musical numbers are always a good way to know you are watching a movie from the fifties.

I was surprised to see Boris Karloff show up, considering they got someone else to play the Monster in the previous film. Maybe he was just too old for that shit. I was also aware that Abbott & Costello disappeared for a good chunk of the picture for some reason. I think I was more impressed with the action beats in this one, that rooftop chase was kinda dope, as was unexpected monster outbreak finale.

The HMG definitely gave Frank a sizable edge, but I think they both exist on their own merits.

I find it odd that the other A&C crossovers weren't included in the book. Maybe they wanted to save space? Who knows?