The next unwatched listing in the Guide was Ian Coughlan's 1981 Ozploitation picture Alison's Birthday. I'd never heard of this movie and I'm pretty impressed that a film that was likely fairly obscure at that time (Movie Guide to Horror – at least the edition I owned – was published in 1985) was featured here. I'm happy that my childhood compendium was at least international. Check out this fucking cover box though! Spoiler, this does not happen and Satan isn't even involved. 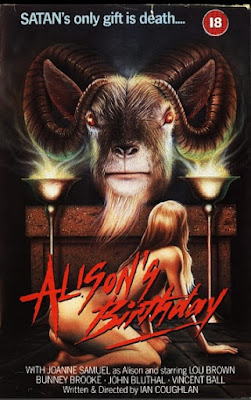 Alison (Joanne Samuel) decides to go home for her nineteenth birthday, despite having been warned not to during a tragic séance three years prior.
Alison's Birthday was proof positive of two things. First, nothing good comes from performing a séance and second; never, ever go against your instincts. Alison knows there is something off about her old homestead, but she ignores it because her Aunt and Uncle are nice, kind people. Even her boyfriend  Peter (Lou Brown), who drives her there in his glorified dune buggy, knows something's up when her relatives blow a gasket when they find out he's been invited to the “party”. Throw in some Celtic rituals, a hundred-and-three-year-old crone in the guest room and a Vulcan cult pinch and you've got yourself some standard folk horror.
It's funny, as soon as I saw the backyard Stonehenge, I thought to myself, “I wonder if this movie is in Kier-la's Woodlands Box Set” And sure enough, it is! It was also referenced in Mark Hartley's awesome doc Not Quite Hollywood, I'd just forgotten. Because well, it was over a decade ago and frankly NQH throws a lot of titles at you.

Alison's Birthday is definitely watchable fare, but it doesn't really have any surprises. I don't think that's even the movie's fault, it is merely that there are many other films that came before and after this that share similar elements. I see Rosemary's Baby – Bunney Brooks as Aunt Jennifer has mad Ruth Gordon vibes – as well as Halloween III and Skeleton Key for starters.
If I was a six-year-old Aussie and I saw this on late night TV, I know for a fact that some of the images within – Isabelle's midnight visit to Alison and that ending freeze frame – would have been burned into my brain, but as a cinephile who's ingested fourty-plus years of horror cinema, it's just aight.

The Guide seems to echo that sentiment, and I can agree that it does have a movie-of-the-week feel. But I still would have been satisfied to have spent a Wednesday night watching it back in the day. 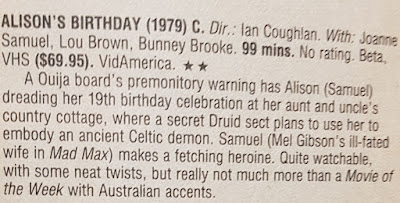