Sorry guys, I’m way behind here. Sunday night I checked out the kick ass documentary Not Quite Hollywood. Director Mark Hartley said beforehand "This movie is not PC. And it is PB. Pre-Brazillian. So you’ve been warned.” That’s okay. I’m a child of the eighties. Onward! 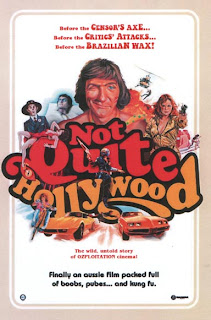 Not Quite Hollywood is a documentary about the low budget Australian movie boom in the late seventies to mid-eighties. The doc is split in three parts, sex comedies, horror & exploitation flicks and the kung fu & road films, which were just balls-out guerrilla with safety thrown right out the window.

Not Quite Hollywood really pops, with a lot of cool graphics and animated transitions. There are so many great horror titles referenced in this movie. There’s Thirst, Razorback, The Long Weekend, Next Of Kin, and Nightmares. And Snapshot, Patrick, Road Games, Dead End Drive-In and this cool looking giant croc film called Dark Age. There’s also this Aussie Straw Dogs one that I can’t remember the fucking name of for the life of me. I’ve got to track some of these flicks down.

The doc is full of people, including Aussie genre pillars George Miller, Brian Trenchard-Smith and Richard Franklin. For a new blood perspective Greg McLean (Wolf Creek), James Wan & Leigh Whannell (Saw) are also on hand. Representing the fanboys is Quentin Tarantino, sporting his usual encyclopedic exuberance. Also appearing is film critic Bob Ellis. This fucking guy has nothing good to say throughout the whole piece. The director said later that he sifted through ninety minutes of interview footage for one positive comment for the end credits – and couldn’t find one! What a bitter old man.

Turkey Shoot takes a beating from those in the doc. Am I the only one who sees the awesomeness of this movie? I was also shocked to learn during the Q&A afterwards that I was apparently the only one in the crowd that had seen Rogue. So much for the Aussie comeback. 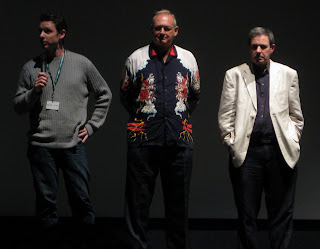 Not Quite Hollywood is a fun and extremely informative documentary. It is imperative viewing for anyone who grew up during the early home video era and ate this shit up. You will definitely want to have a pen and paper handy because no matter how much of a scholar you think you are, there is a good chance you will be humbled by the vast amount of obscurity within.
Oh, and lastly. I totally forgot about BMX Bandits. Best Opening EVAR!