The Toronto International Film Festival is in full swing now, so here are a few comments about two genre-tinged offerings I have seen so far. First, was AJ Annila's film Sauna. 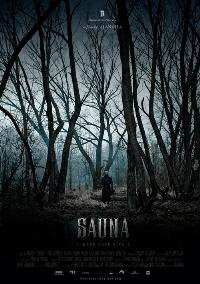 It is 1595. An expedition of Swedes and Russians are mapping out the territory along their border. In the middle of an uncharted swamp, they come across a small village beside which, stands an old stone sauna. Ancient legend tells of such a place that can wash away a person’s sins - but at what cost?
Sauna is a great looking film, with excellent production design and solid performances, but I thought that it lacked that intangible 'pop' overall. This is one of those instances where the individual parts are greater than the assembled whole, a movie of moments that doesn’t overstay its welcome at just over eighty minutes. It is a period piece, in a time and place in history that I knew absolutely nothing about - the aftermath of a long and bloody conflict between Sweden and Russia - which is something I found really interesting.

The conclusion, though open to interpretation, is probably the most striking sequence of an already darkly beautiful movie. This is a relief because movies of this ilk (atmospheric character pieces set in the middle of nowhere) often shit the bed in the last act (i.e. The Last Winter). The film uses a lot of the standard horror tropes, but the quality of the production makes them seem almost fresh.

Sauna is a decent cross-genre offering that I’m sure will find an audience. 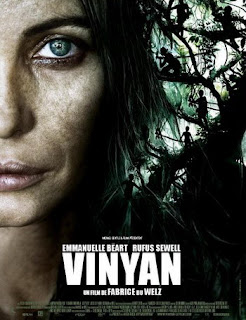 A couple (played by Rufus Sewell and Emmanuelle Béart), crushed by the loss of their son in the 2004 Tsunami disaster, travel deep into Burma after the mother thinks she spots him on a video filmed inside one of the villages.

These types of films – set in locales where I would not be caught dead in – are always very tense experiences for me. The setup, which happens right away, I found totally believable. A grieving mother is convinced that her son is still alive. What can the husband do if he can’t disuade her? He has to accompany her to make sure she doesn’t get herself killed.

Vinyan is absolutely gorgeous. Brilliantly capturing the rain-soaked jungle landscapes is cinematographer Benoît Debie, who not only lensed Calvaire, but also the infamous Irreversible. This is immediately evident in an early sequence that mirrors that discombobulating gay nightclub scene of the latter. Further to his credit is a fantastic continuous crane shot that Du Welz says was inspired by Kalatozov’s 1964 film I Am Cuba. Complimenting the visuals is composer François-Eudes Chanfrault, providing a score reminiscent of his work on last year's extreme French horror flick Inside.

The two leads are extremely strong, emitting grief, desperation and borderline insanity with great skill. It took me forever to figure out the supporting actress playing Kim was Julie Dreyfus (Sofie Fatale from Kill Bill). I’m either getting slow or too reliant on Imdb in my old age.

In retrospect, I probably should have seen the ending coming, but I didn’t. You will either embrace it or you won’t. 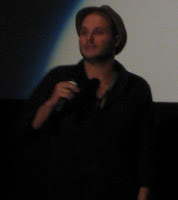 When talking about the project after, Du Welz said he had originally wanted to remake the 1976 Spanish film Who Can Kill A Child? However, after failing to attain the rights, he conceived a similar story and set it in post-Tsunami Phuket. Even though Du Welz’s previous film Calvaire is more firmly rooted in my home genre, I much preferred Vinyan. In addition to it being a much more competent piece, there was no disconnection that I inexplicably felt while watching Calvaire. Also, Vinyan had a refreshing absence of piano-fuelled dance numbers and goat fucking.
Like Sauna, this is another film heavy on atmosphere, although Vinyan has a lot more going for it. It is a wet, dark and gritty encounter about two people trying to reclaim what they have lost at all costs.
Posted by Jay Clarke at 6:18 PM