From Down Under and Beneath.

On the heels of Sunday’s Not Quite Hollywood, is the film Acolytes, directed by Australian Jon Hewitt. When high schooler Mark (Sebastian Gregory) discovers a serial killer in his midst, he, along with his friend James (Joshua Payne) and James’ girlfriend Chasely (Hanna Mangan-Lawrence), decide to blackmail him into taking out a recently paroled bully from their past.

I think the most distracting thing about Acolytes is that I often had a problem buying the three characters as friends. James is constantly berating the other two and as a group they treat each other in a way I found maddening. I know my high school days are far behind me, but I like to think that – even in today’s world of social circles and peer pressure – kids are smart enough to know when to cut someone loose. I realize that there was an unspoken bond keeping these three teens together, but it was not enough for me. This feeling had nothing to do with the performances either because all three were solid. They were much better than the trio in the previously screened Deadgirl. Much of this is due to the fact that Hewitt actually cast actors of high school age. Hanna Mangan-Lawrence is quite stunning as Chasely, exuding a sultriness far beyond her years. If I hung out with a chick like that when I was in school, she probably would have driven me insane with her I’m-interested-I’m-not-interested attitude.

The middle third of the movie is the strongest, when it actually gets into the meat of its excellent premise. Hewitt’s enthusiasm for the genre is clearly evident with several references to classic films, including a finale reminiscent of Dario Argento’s Suspiria. However, towards the end, it goes off on a few weird tangents and also suffers from having perhaps one twist too many. 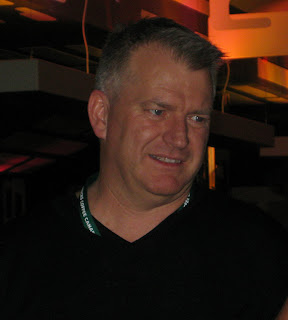 Acolytes is also mired by overused horror tropes. I hope we all are in agreement that this whole ‘flash cutting’ thing has run its course and should be done away with. Every time I see this in a movie now, it immediately strikes me as amateurish. There were also about twenty jump scares, of which only about two or three were actually creative. This is a shame because it all takes away from a great looking movie. The suburban locale surrounded by expansive wilderness made for an interesting visual contrast.

Acolytes is a devilishly clever idea that I don’t think meets its full potential. Overall, it is a decent movie, but left me a little wanting.


I also caught J.T. Petty's new horror western The Burrowers. Ever since I saw his previous film S&MAN (which knocked me on my ass with its overt creepiness when it screened here in 2006), I’ve been waiting to see where he was going to go next.
When Coffey (Karl Geary) travels to his girlfriend’s ranch to propose, he finds that she and her family have been kidnapped. Assuming the local Indian tribe has abducted them, Coffey sets out with a military escort in pursuit. Once out in the wilderness though, they realize the threat is not out there, but underneath!

The Burrowers is a good cross-genre effort. It looks great (as most westerns do I suppose) and the performances are strong all around. I’m always glad to see Clancy Brown and Doug Hutchison in any genre piece. I really appreciate films that try to create new nightmares and construct fresh mythologies to go with them. It makes movies – like 2001’s Jeepers Creepers for example – so much more interesting when you have a new threat to absorb. The creature design of The Burrowers is very cool, helped by the fact that they don’t look like anything we’ve seen before. Petty is very smart to utilize the slow reveal (much like the killer croc movie Rogue I saw earlier this year), delaying the CG fest that the movie regrettably becomes at its climax. Initially, I was a little put off by the ending, but after realizing what it was trying to convey, I’m okay with it. 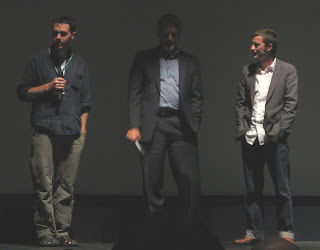 Alas, The Burrowers never reaches that next level. It would be a solid find if you were to come across it at the video store though. It joins the ranks of quality under seen Midnight films like Dead Birds, Isolation and The Abandoned. Even though J.T. Petty’s last two films are comparatively apples and oranges, I still prefer S&MAN over The Burrowers.

There is no doubt that J.T. Petty is a talented filmmaker. His track record is very good (even his 2003 flick Mimic: Sentinel is above average from what I hear), so he will always be on my list of filmmakers to watch.

Just a little footnote on S&MAN: It has been in distribution limbo for a few years now. When I got the chance to talk with J.T. Petty earlier, I had to ask him when S&MAN was coming out on DVD. “Soon.” He said. There is a lot of legal bullshit surrounding it apparently. Keep your eyes peeled for it.
Posted by Jay Clarke at 11:18 AM