One of the films I’m most looking forward to at the year’s Midnight Madness (who am I kidding, I’m chomping at the bit to see most of them) is the Australian documentary Not Quite Hollywood. It is a movie that chronicles all the low budget exploitation and horror flicks produced in Australia in the seventies and eighties. There are some fine movies here. In addition to Razorback (which we had at ye olde video store and was way better than you’d expect) and Road Games (a lesser known title on Jamie Lee Curtis’ Scream Queen resume), there are also some of the more obscure examples of Aussie goodness showcased in this doc, as well. In the interest of preparedness, dirtyrobot and I bunkered in at his place in the ghetto with newly acquired DVD’s of Patrick and Turkey Shoot (aka Escape 2000). Screw Baz Luhrmann! That night we were going to see what the land down under REALLY had to offer (I kid, Moulin Rouge FTW!)

I had actually seen Patrick fairly recently, having tracked it down after seeing Road Games and was impressed enough to want to see more Richard Franklin’s work. This was, of course, before I realized that Franklin helmed Cloak & Dagger and Psycho II, two heavily watched movies of my childhood. 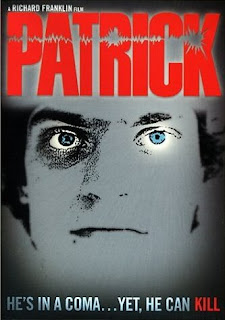 After killing his parents, Patrick (Robert Thompson) becomes comatose and is placed into a hospital. Nurse Kathy (Susan Penhaligan) is assigned to him and soon realizes Patrick is not as harmless as he looks.

Patrick is a little long in the tooth and the low-tech effects can be a little distracting at times, but its heart is in the right place. I certainly had no qualms about watching it again. Franklin knows what to do with the camera, engineering some really good setups to keep you interested.

The dialogue, namely the stuff that comes out of the mouths of Kathy’s two suitors (her ex and current beau), is just laugh out loud ludicrous. I mean have lines like "so much for women’s rape fantasies" ever worked on a lady EVER?! Like I said, Patrick shows its age a bit, but it is still a fun watch. I favour Road Games over this any day. It’s a much better homage to the Hitchcock films I think Franklin was trying to emulate with both films. Lastly, dirtyrobot was quick to point out there is actually a completely unrelated Italian sequel called Patrick Still Lives! Must watch!

Now, it was time for the main event. Turkey Shoot baby! This was a movie that I almost wasn’t able to track down until I noticed it was also known on this side of the pond as Escape 2000 – which is odd considering the movie is actually set in 1995. A search on Zip for said title struck gold and within a week, it was in my mailbox. 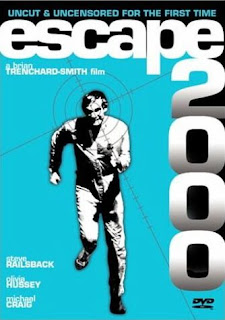 In the future, dissidents are rounded up and sent to re-education camps. To battle overpopulation, Thatcher, the Camp 47 warden, organizes regular death sports involving the prison population. Members of the upper class then pay for the opportunity to hunt down human prey in the surrounding wilderness. Let the contest begin!

There are so many things about this movie that make it so entertaining. I wish I had seen Escape 2000 when I was young. It falls right in with all those crazy action-heavy eighties movies I ate up as a kid. Escape 2000 is a bit like Avenging Force, but on a grander scale and there’s the whole prison exploitation element to it, as well.

As you can see, this movie is trailer fodder. It must have been a joy to cut that together.

The two leads, Steve Railsback (Helter Skelter, Lifeforce) and Olivia Hussey (Black Christmas) are easily recognizable. At first, Hussey looks out of place – the first act plays out like a women in prison film more suited to Laura Gemser than the former Shakespeare nymphet – but she’s just too darn cute for me not to root for. By the end of it though, she’s kicking ass and taking names. Seeing her go all Rambo 4 with the rear-mounted .50 Cal has etched a special place in my heart. 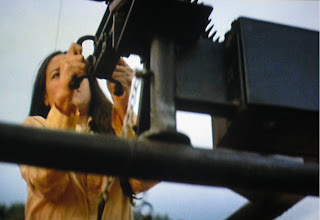 My favourite bits are just the random shit that gets thrown out there. This one hunter (who looks a bit like Ming The Merciless’ younger brother) hangs out with this Wolf man, who he says, “he found in a circus”. Also thrown in is perhaps the most blatant masochistic misogynist lesbian character in the history of cinema. What is the weapon of choice for this huntress, played by Carmen Duncan? A crossbow, naturally. The climax involving a huge gun battle, which looks way

too expensive than you would think a production like this could afford, is fantastic and many amateur (and by amateur, I mean, "hey, you there, you're going to be the guy that falls off the roof") stunt people go flying.

As a sidebar, the behind the scenes interviews almost as hilarious as the movie itself. Everyone involved, from director Brian Trenchard-Smith down to the actors thought the movie was a complete atrocity and something to be forgotten. Lynda Stoner, who played Rita, made it sound like shooting it was the worst experience of her life. Way to sell it, sister! I don’t think we were watching the same film. Escape 2000 is Aussie gold, man! Gold dipped in cheese and sleaze, but gold nonetheless.

If this sounds awesome to you, well you are in agreement with us. I don’t think dirtyrobot’s girlfriend enjoyed it as much as we did, but what can you do? Escape 2000 is one of those great delights that you can put on with a group of friends, drink some beers and just laugh the night away. I love cinema.

So, now I’ve seen at least four of the titles that will be referenced in Not Quite Hollywood. I think I’m ready now. Bring it.
Posted by Jay Clarke at 9:23 PM