Coming out of the Cannes film market last May was talk of a new horror tour de force called Martyrs. A few months later, these trailers appeared.

Then, it was revealed that the French censors were slapping Martyrs with an 18+ (France’s equivalent of an X), the first genre film to ever receive such a stamp. Lining up beforehand, it kind of felt like we were awaiting the gallows. There was a high level of anticipation in the air, and the beach ball that appeared before the nerve shredding screening of Inside last year, was in attendance again. On Wednesday night, I finally bore witness to Martyrs. 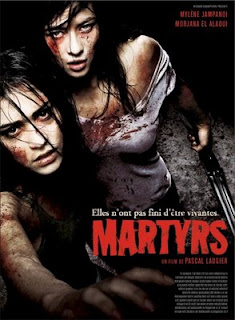 One day, a half-naked and beaten young girl is found wandering the French countryside. While in hospital, Lucie (Mylène Jampanoï) forms a bond with fellow resident Anna (Morjana Alaoui). Fifteen years later, Lucie is on a mission to kill all those who wronged her, with Anna in tow to make sure she doesn’t destroy herself in the process.

I find it hard to say that I enjoyed Martyrs, considering that the tail end of it is a really tough watch. It is certainly intriguing, but I’m left wondering ‘What IS going on in France that is breeding this dark, dark, shit?' Martyrs is thematically split into two halves. The first is filled with extreme gore and grotesque nightmares, but the second is something even more ugly. It goes somewhere none have yet. I was surprised that out of all the possible routes I thought this movie would go, none of them ended up being correct. On the technical side, the gore effects are phenomenal. There are countless elaborate setups, which just further emphasized the crazy world I had stepped into.

As you know, extreme horror cinema has been coming out from France for several years now, but Martyrs is in a class by itself. Where films like High Tension, Frontiers and Inside still - even as gory and violent as they were – fell within the realm of entertainment, such a distinction cannot be made with Martyrs. The last act is awfully unpleasant and the viewer has no choice, but to witness the bare brutality of it. The violence is not over-the-top and there are no Eli Roth style comic beats. It is just there in front of you. Martyrs is more of a punishing experiment than anything else. However, through all of this, it pulls itself back from the brink of blatant exploitation with an actual point. Where I’d always had a problem with the gratuitous nature of Inside’s final moments, Martyrs’ subject matter was redeemed when its overall theme was revealed.

Watching this reminded me of my experience with Gaspar Noe’s gut-puncher Irreversible. While I don’t think Martyrs has as much artistic value as that film does, it has that similar aura of realism and cruelty.

At the Q&A afterwards, director Pascal Laugier introduced both leads Mylène Jampanoï & Morjana Alaoui, maybe just to show that they were both okay. Jampanoï, when asked about her thoughts, went so far as to say that she was not happy with it, but was converted somewhat after seeing that there was an audience willing to receive it. Laugier himself was extremely well spoken and remained fully composed when some pretentious douche bag in the audience called him and his film vile and disgusting. 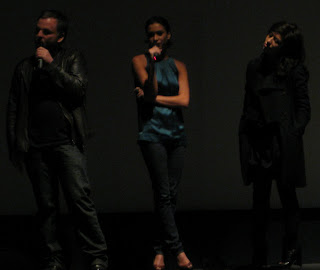 Martyrs has merit, but that doesn’t make it any less hard to ingest. If you are expecting cheap thrills, you might be shocked to find you get more than you bargained for.