Deadgirl is a movie that came out of nowhere. When I first saw it on the Midnight Madness sched, no one seemed to know anything about it. I also had to keep reminding myself that it was American. This is the kind of thing I would expect from the Japanese, or maybe one of Europe’s more unhinged filmmakers, but the United States?! 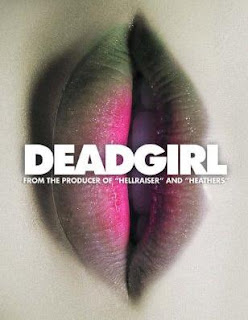 Ricky (Shiloh Fernandez) and JT (Noah Segan) are two slackers, who one day while skipping class, decide to hang out in a local abandoned insane asylum. While investigating the basement, they come across the body of a naked girl, chained down to a table. On further inspection, they realize she is alive! Ricky immediately says they should call the cops, but JT has other ideas.

I was going to originally give this movie a miss, but someone hooked me up with a free ticket, so I figured what the hell? Well, my first extinct was right. Deadgirl was not all that good.

The script wasn’t very strong, but then again, this isn’t generally the type of movie where that is paramount. This may have made a better short, as there is a big chunk in the middle where nothing really happens. I’ve heard comparisons to Stand By Me and River’s Edge and that’s fair on the surface, but the character motivations were never as believable and fluent as they were in those two movies. I understand that Deadgirl is rooted more in the realm of the fantastical, but that shouldn’t be an excuse. Stephen King puts ordinary people in extraordinary situations and you accept it because the characters ARE flesh and blood. Deadgirl never attains this at any point.

Deadgirl definitely gets points for originality, but it takes more than just a fresh idea to make a good film. I didn’t have any problems with the acting, the leads got the most out of their underwritten characters. In fact, Noah Segan is quite entertaining for the first portion of the film, as he channels Christian Slater from Heathers. I will say that Jenny Spain, who plays the feral title character, is a real standout. She was a trooper, considering how difficult the shoot must have been, not only with the nakedness, but also three to six hours of make-up a day. 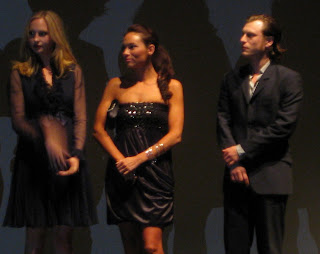 I didn’t hate Deadgirl, but it just didn’t do anything for me. This is probably one of the first duds I’ve encountered in the Midnight Madness program in quite sometime. Even last year’s The Devil’s Chair and 2004’s Kontroll (two that are often shit on by MM goers), offered enough for me to give them positive endorsements. Don’t get me wrong, I know there are people out there who will get a kick out of Deadgirl, I’m just not one of them.
Posted by Jay Clarke at 1:36 PM

Man, Deadgirl wasn't that bad. I was actually freaked out by it. Up until the half way mark it scared me in parts.

I will be seeing Acolytes tonight. I'm looking forward to your review of it.

That was Mike Schwartz by the way :)

Dude, I found Deadgirl to be a totally refreshing look at the whole zombie film genre, plus the scene where they are at the mini mart hunting for a new girl is just straight out brilliant.