This month’s Non-Horror Selection is the unique little indie Primer. 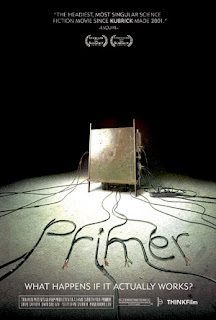 When two amateur inventors (David Sullivan & Director Shane Carruth) construct a machine that can manipulate time, they become increasingly irresponsible with the power they have stumbled onto.

I first saw this movie at the Toronto Film Festival in 2004 and was immediately struck by how such a tiny production could be so intricate and thought provoking. It is a testament to what you can do with just seven thousand dollars and a lot of drive. Carruth had so many balls in the air – as director, writer, producer, DP, editor, music composer, as well as co-star – that it is amazing that he was able to finish it. Using friends, family and locations acquired through connections, he has created a fascinating piece of science fiction. It is extremely heady material, filled with technical jargon. This was deliberate on the part of Carruth who said he didn’t want to ‘dumb down the material’. Primer is definitely a film you’ll want to watch more than once, so you can fully appreciate how events at the beginning affect things at the end. Don’t be surprised if you are left scratching your head though, as I’ve seen it a few times now and there are still parts I don’t fully understand.

I have heard this movie compared to Kubrick’s 2001 and I can see that. In terms of appearance and scale, they couldn’t be more different obviously, but both of them have this inherent singularity. They are unfiltered science fiction. Primer though, is as bare bones as they come. There’s no DeLorean, no cyborg assassins, just two average guys who discover technology beyond their comprehension.
Primer is more engaging than some I’ve seen that cost five thousand times more to produce. If you are a fan of science fiction thinkers, be sure to look this one up.
Posted by Jay Clarke at 10:06 AM