This month’s non-horror selection was discovered by way of Colin Geddes, the programmer for Toronto’s Midnight Madness programme. I was on his Facebook page sometime ago and thought to myself ‘what would a person as knowledgeable about film as Colin is, put down as his favourite movies?’ Looking through the list, I saw obvious choices like Goodfellas and The Good, The Bad and The Ugly, but also a curious title called Punishment Park. A catchy moniker such as that warranted further investigation. 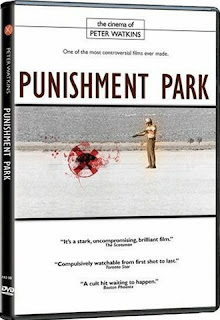 Punishment Park is the 1971 offering by provocative filmmaker Peter Watkins. In a not-too-distant-future America, left-wing dissidents (activists, protestors, artists) are put on trial by a jury of their peers. Once convicted, they are given a choice. Either serve out their prison sentence, or go to Punishment Park. The Park is a section of the California desert and if they can make it across the fifty-mile distance in three days without being captured by the pursuing National Guardsmen, they will earn their freedom.

The film is shot in fake documentary style, one of the first to employ this, after honing the technique in his previous shorts The War Game and Culloden, in which possible (a nuclear attack on England) and historical (the 1764 Battle of Culloden) events are re-enacted. Punishment Park follows two camera crews. The first covers a bunch of dissidents on trial, and the second are out in ‘the park’ interviewing prisoners and guardsmen alike. The genesis of Punishment Park occurred when Watkins heard about the events surrounding the trial of The Chicago Seven, and later the tragedy at Kent State University. Already fuelled by his opinions on the McCarran Act of 1950, Watkins would cement his reputation as a political agitator.

The reason Punishment Park is such a remarkable film is that the issues raised are timeless. Totalitarian governments don’t happen overnight, they start with baby steps. A suspension of a civil right here, the stifling of free speech there. All in the name of national security. It would be easy to discount these dissidents as the dregs of society, as abrasive and uncouth as they are, but it is the behaviour of those with the power – entrusted with impartiality – that is the most appalling. Films of this nature are compelling because they are often not as implausible as you think. The ‘not-too-distant-future’ is just that. Okay, enough with the lecture. What makes Punishment Park even more realistic is the overall candidness of it. The actors used were not professionals and large portions were improvised really giving you the impression that the camera was just recording something that actually took place.

Because of its ugly subject matter, Punishment Park is a tragically under seen film. Make no mistake though; it is as poignant today as it was almost fourty years ago. If you can find it, you should definitely give it a watch. You may be surprised by how much of the dialogue you recognize from today’s headlines.
Posted by Jay Clarke at 11:09 AM