A movie I had been waiting to see for some time was Midnight Meat Train. Directed by Ryuhei Kitamura (Versus) and adapted from the Clive Barker story, it features Vinnie Jones as a hulking transit-going serial killer. I think those three things alone should be enough to pique any genre fan’s interest. 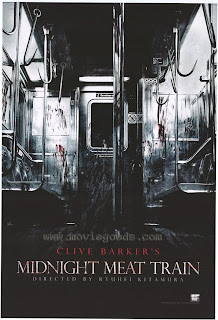 Photographer Leon (Bradley Cooper) stumbles upon the trail of a killer (Vinnie Jones) who likes to dispatch late-night train goers.

The best part of Midnight Meat Train is that Kitamura is behind the camera. His fresh camerawork throughout certainly makes for some great moments. I really dug the look of the film too. It gets very action-y toward the end, but I guess that shouldn’t be surprising, considering his kinetic nature. Vinnie Jones is as menacing as ever, playing someone who you wouldn’t want to cross paths with any time of day, let alone after midnight. Leslie Bibb (Iron Man) and Roger Bart (Hostel II) are some other familiar faces in the cast and Ted Raimi shows up in an eye-popping cameo.

The movie delivers in the gore department for the most part, though I would have liked less CGI. I’m not sure why Kitamura decided to go this route. He can’t use money as an excuse because Versus – his signature film – was made on a shoestring and boasted tons of practical effects work. That’s not to say the visual effects in Meat Train are bad, it’s just that as time goes by I’m finding myself getting more and more distracted by bits done with zeros and ones. 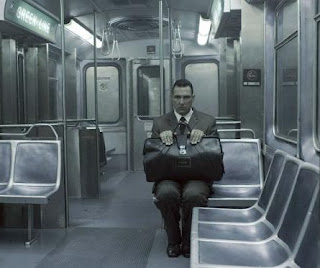 I have not read the Clive Barker story that this movie is based on, but it seems to me that they may have just taken the nugget of the idea and padded it with a lot of run-of-the-mill filler. I know that this is an accepted trope of horror, but one day I hope we will be beyond the point where we see the protagonist sifting through old newspaper clippings for the sake of exposition. To all you screenwriters out there, it can be done in other ways. Take Jack Brooks: Monster Slayer for example. I know we’re talking apples and oranges here, but bear with me for a moment. In Brooks, the back story is revealed to the title character via old man Howard – played by David Fox – whose delivery is so comically brilliant that the scenes between the two of them are some of the best in the entire movie.

I was feeling the story in the first half as Leon was hanging out in the ghetto trying the ‘capture the city’ with his camera, but that seemed to be all but abandoned by the last act. That may have been why the ending wasn’t satisfying to me. There weren’t really any surprises (save one) and when the inevitable explanation comes for all that has transpired, I was sort of left going ‘oh… okaaay.’

Midnight Meat Train is a worthwhile watch, but it didn’t really pack the punch that I was hoping for.
Posted by Jay Clarke at 10:44 AM

Why did they have to ruin an otherwise marvellous horror movie by having that british scum vinnie jones in it. The british are total garbage and they should be completely shunned by the rest of the world with regards to every area of human endeavour.