12 Things I Love About The Evil Dead 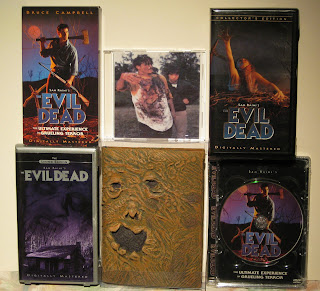 I usually don’t do ‘list’ articles because God knows there is an overabundance of them on the Internets, but screw it. Vagrancy Films screened a print of The Evil Dead last Wednesday and I dropped everything and made sure I was there. Not only because it had been a few years since I had seen it projected, but it also gave me a chance to hook up with a bud I hadn’t seen in a long time (good to hang with you again Schwartzy!). The Evil Dead has always been one of my staple films and every time I watch it, it reminds me what I love about horror and the art of low budget filmmaking itself. I had a fantastic time at the screening and it filled me with great joy to see that – even twenty-five years after its release and its excessive DVD availability – The Evil Dead can still fill a theatre. So, please join me as I reminisce about some of the many things I love about this quintessential cult classic.

Young filmmakers Sam Raimi, Bruce Campbell and Rob Tapert wanted to make a feature, but before they could shoot a frame, they needed money. They made a thirty-minute short called Within The Woods on a shoestring and began showing it to possible investors. This included dentists, people in real estate and local merchants; anybody thought to have money. With a grainy, low quality Super 8 print they managed to finagle ninety-grand out of people’s pockets. Within The Woods is not without its charms, but anyone who has seen it must assume that it was mainly the super enthusiastic sweet talking skills of the trio that led to those purse strings’s loosening.

Obviously, The Evil Dead is nothing without THE MAN, Bruce Campbell. Every time I watch it and there is that first close-up of Bruce in the car I am always struck by how young he looks. The now gigantic horror icon was barely twenty-one when he shot The Evil Dead! Having been friends with Sam, Rob and their crew (who I like to collectively refer to as The Renaissance Boys), he appeared in most of their earlier Super 8 films. This was mainly because, as Raimi has said, “Bruce was the good looking one.” This made Bruce the logical choice to don the blue and brown and become the reluctant demon killer Ash. Bruce as Ash would endure unending punishment at the hands of Sam, who could seemingly talk him into doing pretty much anything for a shot. 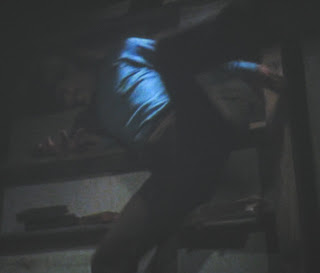 The first of MANY knocks!
Over the course of the shoot, Bruce would be abused, pummelled and covered and covered AND covered in blood. And through all that, he was always up to the challenge. It was that physical side of him, as well as his sidesplitting demeanor, that really made Bruce a star of the genre.

If there were another star of The Evil Dead, it would be the camera. Sam Raimi is world renowned for his distinct style of filmmaking and the roots of this can be seen all over his first feature. Sam has said that he always equated filmmakers with magicians, with camera shots being their tricks. "Do they know how I am doing this trick? If not, then I am succeeding." The Evil Dead is a testament to ingenuity and sheer will because, make no mistake, this is what was holding this picture together at certain stages of the shoot. Raimi had a vision of what he wanted for The Evil Dead (then known as The Book Of The Dead) and because funds were incredibly limited, he had to continually invent ways to achieve that vision. This included constructing rigs that have become synonymous with the name Raimi, the most well known of these being The Shaky-Cam. Nowadays, Shaky-Cam is part of film canon and refers to the style used in movies like the last two Bourne entries and Cloverfield, but back in the day, this was a term that Raimi pioneered. The Shaky-Cam was constructed due of their lack of a Steadicam and used for all those sequences where you see the point-of-view of the demon force travelling at great speeds. The camera was fastened to a two-by-four, with one person on each end of it. This enabled them tons of freedom for camera movement. Other innovative practices included,

The Sam-O-Cam – For the first shot in the swamp, Raimi taped the camera to his hand and sat in an inflatable raft that was pushed along by two wading crewmembers.
The Ellie-Vator – So named for actress Ellen Sandweiss. This was an X-shaped rig fastened to her back to levitate her off the floor during Cheryl's possession scene.
The Ram-O-Cam – This was utilized when the camera bashes through windows. The camera is again on a two-by-four with a device out front to break the glass just before the camera goes through it.
The Vas-O-Cam – Invented by crewmember Tim Philo, it is the shoestring equivalent of a dolly track. The camera on a two-by-four, slides along another plank greased up with Vaseline. This was used in the long take scene where Ash carries Linda’s body outside.

The one-of-a-kind location in rural Tennessee plays a major part in the feel of The Evil Dead. The dishevelled cabin took weeks to clean out and get into shape. The crew also had to deal with mud slicked roads and the constant curiosity of the locals. The cabin has since burned down, but it will forever live on in the film.

A few scenes in the movie take place in the cabin’s cellar, but the place they filmed in had no basement, so they had to construct one. The cellar you see in the cabin is only a four-foot deep trench. All the cellar footage was shot in a farmhouse in Michigan, many months later. This is movie magic at its best, people! 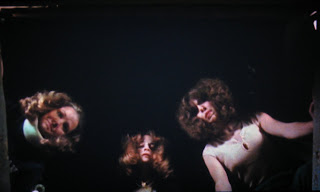 Looking down into Michigan. 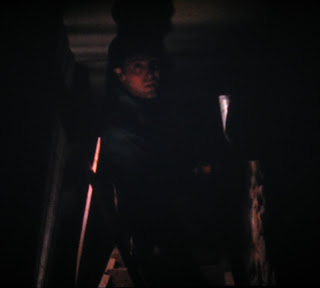 Looking up into Tennessee.


The ‘Classic’ 1973 Oldsmobile Delta 88. It has appeared in every single of Raimi’s films (except The Quick And The Dead for obvious reasons) and has become sort of a running gag among Raimi fans. 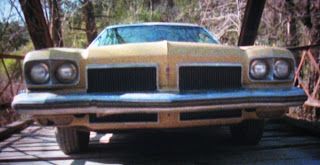 The Peek-a-boo sequences are a great touch. At first, this exchange between Ash and Linda seems like a cheesy romantic interlude (which it is), but Raimi later revisits it while Ash is burying his then dead girlfriend.

Scotty the asshole. This guy, played by Hal Delrich (a pseudonym to avoid union woes), has all the great lines in the movie. The exchange between Scotty and Ash about his ex-girlfriend’s looks cracks me up every time. 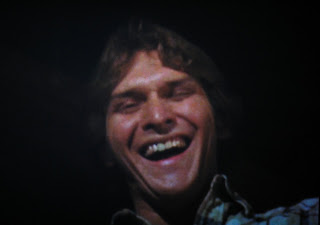 Yes, they went THERE. Probably the most infamous part of The Evil Dead is the tree rape. This is what likely dubbed it a ‘video nasty’ and made it so elusive on home video in many parts of the world for so many years. It was a decision made by Sam Raimi and Rob Tapert while watching dailies and was shot in so many little pieces, that they just didn’t realize how much it was going to affect audiences. In an interview for The Incredibly Strange Film Show, Sam relates (clip below) that he regrets he went that far with it.

I have to give it up for Tom Sullivan’s amazing production design. This is the man who created the Book Of The Dead and matching ceremonial dagger. He also worked with Bart Pierce on the stop motion animation meltdown sequences of the movie’s climax.

Over the course of a few films, there was a playful exchange between Sam Raimi and fellow horror filmmaker Wes Craven. Raimi observed a torn poster of Jaws in Craven’s 1977 film The Hills Have Eyes and then decided to do the same thing in Evil Dead. 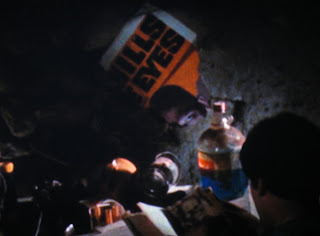 Craven then responded to this by having his main character Nancy watching The Evil Dead on TV during his 1984 masterpiece A Nightmare On Elm Street. Not to be outdone, Nightmare’s poster and Freddy glove appear in the 1987 Evil Dead sequel. Like the ubiquitous appearances of his classic Oldsmobile, it is this playfulness that exists within Raimi that makes him such an enjoyable filmmaker to watch.

The Evil Dead has even spawned a musical. The first show was Aug 14, 2003 (the night of the East Coast blackout) in Toronto and continued with runs in Montreal, New York and most recently California and Seoul, Korea. No matter how unlikely that may sound, I have seen it a few times now and it is every bit as awesome and enjoyable as the movie that inspired it. 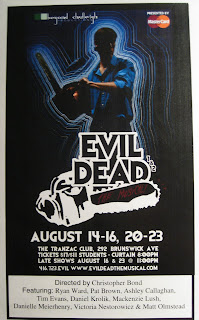 I could go on, but you get the idea. I ADORE The Evil Dead. It most deservedly holds a place in The Fearsome Fifteen. Sam Raimi and company endured one of the most gruelling shoots on record to give us – to quote Stephen King’s famous tagline – “a ferociously original horror film”. In a forest outside Knoxville, Tennessee in the fall of 1979, a small crew of green filmmakers stretched a minimal budget and persevered through impossible odds. Their success maybe only due to the simple fact that no one told them they couldn’t do it. You boys are an inspiration to us all.
Posted by Jay Clarke at 3:31 PM

It's the first time I see this Blog. I've readen this post and... How's possible that it has 0 comments??

It's a wonderful work. Congratulations. I love Evil dead too

I've never seen your blog before, but I am glad that I have now!

Well, Evil Dead is definitely my guiltiest pleasure as I watch it more than any other film. This list, makes my hips swing.