The subject of this month’s Final Girl Film Club selection is quite coincidental because I actually caught 1977’s The Car for the first time on late night TV just a few months ago. It’s a good thing that The Car is a highly enjoyable movie and one that I had no problem revisiting for the FGFC. 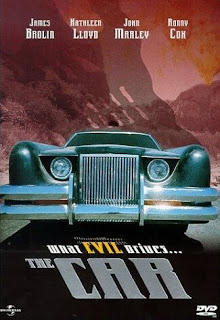 A large black car that kills without warning terrorizes the residents of a desert Utah community. The local sheriff (James Brolin) has to stop it before everyone in town becomes a victim of… The Car.

Coming out a full six years before Stephen King’s Christine, The Car is a little broader in scope. While Christine picked her targets, The Car is indiscriminate. It will go for anyone, including that annoying hitchhiker who was just TOO happy. The car is the star of this movie, as Jaws – which this movie is sometimes compared to – was the star of his. The Car itself, a customized Lincoln Mark III, has a very iconic look to it. It’s amazing how much the front grille can add personality (a face if you will) to an inanimate object. 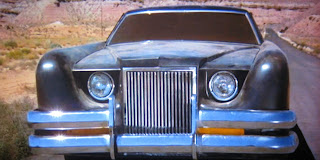 The car basically has free reign here, especially considering it’s up against a sheriff’s department that unfortunately has the most flammable cop cars in the history of cinema. Maybe it’s because the film is sped up to make them appear to be going faster than they actually are. I kept expecting Benny Hill in drag to appear out from behind a mesa. Luckily, Brolin is the shit and rides a motorcycle! I should mention that there is actually some pretty good stunt work in this and for every laughable moment, there is one that stands out.

There are a lot of sass talking characters in this movie. Brolin’s kids are over precocious (“This is grown up talk huh?”), the town drunk/wife beater (played with extra crust by R.G. Armstrong) needs a smack and Brolin’s girlfriend (Kathleen Lloyd) never seems to be at a loss for words, which comes back to bite her in a scene I bet you’ve NEVER seen before. Ronny Cox – usually a badass, as in RoboCop and Deliverance – shows up here as a sniveling alcoholic deputy.

The movie is a little dated, sure - if not just for the fact that nowadays, with gas prices as they are, Evil would have to find some other cheaper alternative to raise hell - but The Car is a movie that’s great for those lazy Sundays, when you are looking for something fun. I mean, at one point, a fat woman yells out "CAT POOOO!" for Christ’s sake. What more incentive do you need?
Posted by Jay Clarke at 11:08 AM

Make sure you watch the Futurama episode "The Honking" for a great homage to this movie.

"The Car" was definitely worth the watch.