Yesterday, I peeled off from work early to catch Mirrors, the new movie from Alexandre Aja (The Hills Have Eyes remake). Going in, I had heard that the movie wasn’t screened for critics, which was a bad sign, but there are exceptions to every rule (The Ruins) so I kept an open mind. It looks like the media blackout may have worked in their favour because when I was buying my ticket for the four-fourty show, I noticed that, much to my surprise, that the next two shows – the five-twenty (!) and seven o’ clock – were sold out. I have NEVER seen that for a horror title that early in the day. Whatever they did to get people in the seats, it worked; at least for the first weekend anyway and let’s face it, that is what’s important to the bean counters these days. 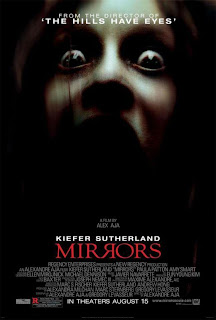 A down-and-out ex-cop (Kiefer Sutherland) gets a job as a night watchman at an old burned-out department store. When he starts seeing things in the mirror-covered interior, he starts to doubt his sanity. Then he receives a package from the dead man he replaced that suggests there really is something deadly about the MIRRORS.

I’m sad to report that Mirrors is pretty average fare. It is clear after the first act that it is, in fact, a Korean remake, though I didn’t know that beforehand. I think the studio was wise to not make this apparent during their ad campaign because the whole Asian horror thing has played itself out over here. Aren’t we at the point where, after recent duds like One Missed Call and Shutter, we roll our eyes when we hear that the latest thriller is a hastily slapped together repackaging of something from the Far East? There are some good bits, (Aja does a good job of keeping the mirror gimmick fresh) but mainly it is a baseline story stretched around a few cool set pieces, the basic Asian horror formula. In addition to its Asian underpinnings, there was also a lot of Bill Malone’s House On Haunted Hill in this movie too. I don’t think anybody would have batted an eyelid if Mirrors had been a Dark Castle release.

The story, as I said, was a little wobbly. It follows the standard structure used in The Ring and many others, but character motivation is a big problem early on. I don’t care how badly you need this job guy, if on your second shift the place makes you hallucinate that, say, oh I don’t know, YOU ARE ON FIRE, it’s time to maybe call it a day and put in an application at McDonalds. As for the acting, Kiefer is Kiefer. It’s just very hard for me to see him as anything other than Jack Bauer these days, especially when he utters lines like “Don’t make me threaten you” and the ever-popular “DAMMIT!” I had to chuckle at every one of these bits, which was probably not the intended reaction they were going for. 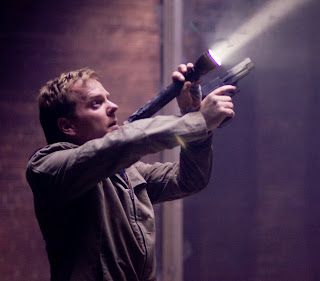 Considering this is Alex Aja (the guy responsible for the lusciously crimson High Tension) with KNB EFX at his disposal, I would have thought there would be more gore in this. Sure, there are two or three wonderfully bloody bits in the film, but that’s about it. This is disappointing because that was the only thing I was counting on Mirrors to deliver on. There was also a bit too much CG going on. I know KNB has been utilizing digital effects to augment their work for some time now, but it was nowhere near as fluent here, as it was in The Hills Have Eyes, KNB’s previous collaboration with Aja. Lastly, a big critique I have is the end action sequence. It wasn’t shot very well. There was a lot of shaky cam in darkness, which was very disheartening. There was likely some good KNB stuff on display during this scene and it would have been nice to actually see it.

At the end of the day, Mirrors is watchable stuff. I’d rather watch a good director slumming, than something from some nobody that has no business being behind a camera.

Have to agree with you...I did not enjoy Mirrors all that much....maybe if it wasn't from Alexandre Aja I would be less forgiving....I thought I was watching a special halloween 24 episode. It was as if the movie was written around that "jaw-dropping" scene. Was not impressed...but it was good to see my "girl-crush" in the film....even if she was flipping horrible in it. :P