The horror anthology show Fear Itself continues to soldier on over at NBC, so here are two more reviews. Episode seven was directed by Mary Harron (American Psycho) and entitled “Community”.

A young couple (Brendan Routh & Shiri Appleby) move into an exclusive gated community only to find that the residents engage in some bizarre practices in order to maintain their quality of living.

Community is a weird affair that tends to throw reality out the window. Relaying the message of ‘always read the fine print’, it takes a fairly standard premise and launches it into the absurd. Consequently, it is fairly lame and by-the numbers. I’ve seen this setup before in things like the Stepford Wives, The Twilight Zone and The X-Files and the only thing that is different here is the conclusion. I was hoping Mary Harron could add something to combat the overall banality of the material, but sadly I found her presence was hardly felt. I almost didn’t recognize Brendan Routh, who seems to have not flown off into obscurity and is still working. His bland performance certainly won’t win him any meetings with casting directors though. 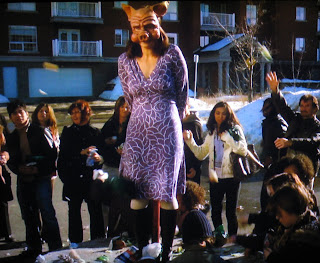 Just another day in the neighbourhood.

Granted, I have to grade this episode on a curve because the power went out at my place (causing me to lose a few minutes toward the end), so I’m little cloudy about certain character motivations. To be honest though, the story wasn’t compelling enough to make me want look it up online – it certainly was not like the time I almost chucked my DVR across the room when it cut off the last fifteen minutes of Carpenter’s Cigarette Burns, the best Masters Of Horror episode EVAR!

So, another miss. If the pattern continues, the next episode should be good, right? Right?!

Next up, is “Skin and Bones” by Larry Fessenden (The Last Winter).

Rancher Grady (Doug Jones) arrives back at his farm emaciated and frostbitten after being lost in the mountains for almost two weeks. His family soon notices that all is not right and is soon in a fight for their lives against something Grady brought back with him.

This piece is all about Doug Jones. He is one creepy fucker in this. You may not recognize him without all the prosthetics and computer accompaniment, but the impossibly thin Jones has been in dozens of films. He not only played The Silver Surfer in The Fantastic Four sequel, but also Abe Sapien in both Hellboy films and the dastardly Faun in Guillermo Del Toro’s masterpiece Pan’s Labyrinth. Skin and Bones is an apt title for this episode, as Jones is just THAT. I swear, at some points, I could see his internal organs. Even more crazy is that frame of his isn’t just for one role (ala Christian Bale in The Machinist), he’s like this ALL the time! 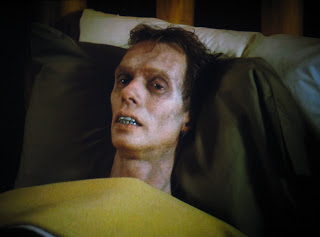 Someone please get this guy a sandwich!

Skin and Bones starts strong, but tragically overstays its welcome. The climax drags and then ends abruptly, which is a shame because there was something good going on here for a bit. Alas, that seems to be the late motif of Larry Fessenden. His last film The Last Winter I found really engaging until the end where it toppled like a house of cards and I hear the same can be said about his 2001 film Wendigo, as well. And, just what IS up with Fessenden and the Wendigo? Why is he so obsessed with that legend?

Skin and Bones is decidedly better than Harron’s previous episode, but still not as consistent as of some of the earlier Fear Itself offerings. It is definitely worth checking out though, just to see a rare glimpse of Doug Jones stripped down to his freakishly bare essentials.
Posted by Jay Clarke at 12:34 PM

I STILL havn't seen the last 15 minutes of Cigarette Burns because the same thing happened to me!!! Guess I should rent it one day :/

Great reviews for both episodes...

I thought Community ended badly. Also, they weren't so subtle with the whole "Christopher Reeves" reference. ;)

I had a discussion with Kevin about Skin and Bones and how he thought it was genius and I thought only the first 15 minutes was genius. :P He is a creepy mo-fo! But, yeah...Fessenden, I don't want to see anymore Wendigo bullsh*t! Your first entry was more than I can take.

If you guys want Cigarette Burns...I have it! :)

I did see Burns eventually... awesome setup and awesome delivery.