Survival horror gaming has typically been the domain of the Far East. Japanese companies like Capcom and Konami have reigned supreme for years now, especially with crown jewel Resident Evil 4 recently revolutionizing the genre. When Electronic Arts – a company known more for cranking out yearly ‘updates’ of its many sports franchises, than for innovation – announced they were throwing their hat into the horror gaming ring, the initial response was skepticism. Then, in early 2008, the first trailer for Dead Space was unveiled.

It looked pretty snazzy to be sure, but it was going to take more than flash to win over people anxiously awaiting the next RE4. Dead Space finally released last month – into a ridiculously crowded fall season – and I’m here to tell you that this game is a bloody masterpiece. Buy, rent, steal, do whatever you have to do, but PLAY THIS GAME!

Here are TEN reasons why you should.

The variety: As wicked sick awesome as de-limbing monsters with a plasma cutter is, it could have gotten a little boring after the third or fourth level. Fortunately, the developers were on top of it and made sure to pack a hefty bag of tricks. Each level (there are a total of twelve pulse pounding chapters) offers a new challenge and always keeps you on your toes. How you interact with your environment also changes as several sections take place in zero gravity, adding an exciting new dynamic. And it that weren’t enough, you even go spacewalking OUTSIDE THE SHIP!

The Necromorphs: Again, variety is the order of the day. At first, it seems like you are just cutting up the same baddies over and over, but then they get deadlier, nastier, and BIGGER! The creature designs are as grotesque as they are innovative, so have fun peering around every corner.

The weapons: You are onboard a mining vessel, so the items at your disposal – and there are a ton of them – are all tools that a miner would use. Some real thought went into these and you really have to see them in action to fully appreciate them. Each weapon also has a secondary function that can come in handy, as well. Hopelessly surrounded by an enemy? Never fear. Throw up a 360 burst with your pulse rifle and shred anything within a ten-foot radius. Your suit (or rig as it is called) can also help you out of numerous jams. Your stasis module can slow down time to get you out of sticky situations and kinesis gives you the ability to lift and push heavy objects, much like Jedi force power. All of these options together give you countless ways to engage a situation. 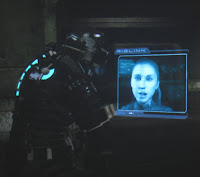 No HUD: Probably the most innovative thing that Dead Space brings to the table is the removal of the HUD (heads up display) menu. In all previous games of this ilk, you had to go outside the game play to check your map and/or inventory, which ultimately took you out of the moment. In Dead Space, everything is projected out in front of you via in-game holographic displays. Tell me that other developers aren’t going to rip THAT off! Your health bar (and this is the coolest thing EVAR) is on the back of your suit and can be clearly seen at all times via the over-the-shoulder camera that Resident Evil 4 perfected in 2005.

The atmosphere: This is a huge part of what makes any horror game a success and Dead Space fires on all cylinders. The surround sound is used to its full effect and I had several complaints about the noise, even at HALF volume. Check out my favourite trailer below, which also plays if you leave the main menu running idle.

The universe: Dead Space had a large promotional machine in motion long before it hit shelves. In addition to Downfall, the feature length animated prequel that came out in October; an animated comic (the prequel to the prequel) started releasing in six parts on Xbox Live, PSN and YouTube back in March. I haven’t seen Downfall yet, but the animated comic, with artwork by Ben “30 Days Of Night” Templesmith was quality stuff and a perfect primer. Aside from that, the game itself is a living, breathing environment filled to the brim with detail.

The graphics: This game is gore-ious to look at. Dead Space was not rushed out the door. It is as slick and polished as any game I’ve ever played. I think I saw maybe two glitches the entire playthrough. That’s a credit to a development team that nailed every T and poked every I before unleashing their creation onto the world.

Save points: Your game automatically saves at what seems like every turn. That means if you walk around a corner and get sucker punched by a flying tentacle, you appear back where you were moments before. That may seem that it cuts down on the difficulty, but let me be frank; I’m in my thirties and have a full time job. I don’t have excess time to devote to just travelling to the bit I keep dying at (cough GTA IV cough). It really cuts down on the frustration when you don’t have to stress about that sort of stuff. I’d go so far as to say that the actual save points are only necessary when you have to stop and go do other annoying things like sleep and work.

Space Hoops: Just when you thought things couldn’t get any cooler, you are presented with a mini-game called Zero-G basketball in Chapter 10. Yes, it is what it sounds like, but even better as you use kinesis to score baskets. Even though humankind was on the brink of annihilation, I had no qualms about burning fourty-five minutes on the court trying to beat my high score on Level 6.

First person Asteroids: This section just comes out of nowhere and launches Dead Space into the stratosphere. Growing up in arcades, I always wished I could play Asteroids from inside the ship. Well, thank you Dead Space; you fulfilled that dream. And it was awesome! 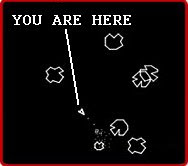 So, that’s ten. Why ten reasons? Because – and I shit you not - this game is a freaking TEN OUT OF TEN. Excellent job EA, you’ve made a believer out of me. Altman be praised!

Way to go on this review! Having spent way too much time in my life devouring horror films (see my somewhat-similar site The Dudes of Horror) I can attest that this game- played alone in the dark on a large wide screen and in surround sound- is more frightening than any film I've watched in my adult life. This game freaked me, man. I totally love it and can't stop playing it over and over.

Feel free to drop me a line anytime over at my site... looks like we dig a lot of the same films. Now that I have discovered you here, I'll be checking in!