After being popularized by the likes of Tarantino, Nolan and Inarritu, it seems that films that use non-linear storytelling are a dime a dozen these days. While it is true that the independent film market is saturated every year with efforts using this device, that doesn’t mean that a good number of them aren’t worth your time. Take Karen Moncrieff’s The Dead Girl for example. 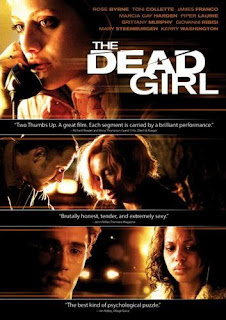 Several points of view are explored after a dead girl’s body is discovered in the desert.

The Dead Girl is engaging stuff, apparently conceived from a murder trial that Moncrieff (who’s previous feature Blue Car was a festival darling in 2002) sat in on as a jury member. It is a shame that works like this often fall through the cracks of mainstream recognition. What really stands out is the huge ensemble cast assembled for this project. There are a dozen meaty characters in The Dead Girl and are all portrayed by a recognizable face. Marcia Gay Harden as the mother and Rose Byrne (a veteran Aussie actress just waiting to explode) as a young woman with a missing sister are especially strong. I almost didn’t recognize Brittany Murphy (who appears as the ill fated dead girl) at first. Not that playing a trashy character is anything new to her (see Spun among others), but she seemed different somehow. She looked taller, skinnier; even her speech patterns were different. I’ve always had a soft spot for Murphy, which made the inevitable conclusion all the more tragic. The subject matter is ugly and there are as many unlikable characters as there are likable, but most of them make it through their story arcs with a ray of hope; all somewhat facilitated by the death of the title character.

For excellent performances brought forth by quality storytelling, look no further than The Dead Girl.