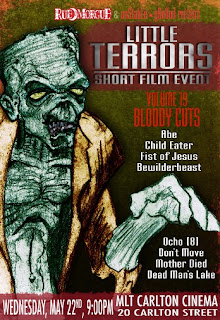 Last week, I checked out the latest edition of Justin McConnell's short film showcase Little Terrors. Once again, he put together a solid line-up of shorts, with most of them being of European pedigree this time around. Here was the cream of the crop.


I was hugely impressed with UK filmmaker Rob Mcllelan's philosophical sci-fi short ABE. It's simple, great looking and the visual effects are spectacular. I have rarely seen a CG character with such presence and weight onscreen, and certainly not from an indie venture. If only Hollywood held such high standards. But don't take my word for it, here it is below.


This Little Terrors programme featured several shorts from the UK based short film collective Bloody Cuts, the best of which was Don't Move by Anthony Melton. It was a cool idea that cleverly started in the middle and finished on a fantastic gore set piece. Check it out below.


Another solid short was Child Eater, which recently played SXSW. It was a little rough around the edges, but I liked how director Erlingur Thoroddsen was able to infuse some original lore into the tried-and-true babysitter in peril genre. It's not easy, let me tell you. Here's the trailer below.


Next, was a wonderfully skillful short from Spain called Ocho. It was gorgeous and even more impressive was there's not one line of dialogue within the fifteen-minute running time. This is just an excellently crafted horror short. Check out the trailer below.


Bewilderbeast, from Danish director Balder Skånström-Bo is like a work of art. While it is true that twenty-five minutes is a problematic length, there is no denying that he created a universe that demands your attention. There is true vision here. Here is the trailer below.


The perfect capper was Spaniards Adrián Cardona & David Muñoz new splatstick opera Fist of Jesus. Anyone familiar with their 2010 short film Brutal Relax should know exactly what to expect. So, put on your slicker and behold, Fist of Jesus!