An Engineer's Work Is Never Done.

It took me a month, but I was finally able to square away some time to play through the third installment of Visceral Games' Dead Space franchise. 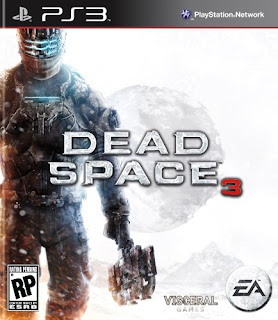 Three years after the events at The Sprawl, Isaac Clarke is called upon to travel to the Marker homeworld to put an end to the Necromorph threat once and for all.

Dead Space 3 was a highly enjoyable experience, and I think some of the flak it got from critics was a little undeserved. I get the backlash about the series straying from its survival horror roots, but it hardly resulted in a decrease in quality.

So, let me start with the positives. First of all, the game looked great and the new environment – the ice planet of Tau Volantis – was a fine choice. In addition to the usual cast of Necromorphs, there were some new rotting faces, including some nasty phase-shifting baddies that bent back at the waist. The game also added man-to-man combat, as there are some militant Unitologists trying to stop you, as well. This is where the influence of titles like Mass Effect felt most apparent – especially the tacked on cover system – but these sections were so few and far between that they're almost inconsequential.

As for the heavily marketed co-op mode, Dead Space 3 made a monumental decision here. Unlike Resident Evil, you aren’t saddled with idiot AI if you decide to go solo. It's just you. I can’t stress enough how much I appreciated that. And I actually dug the story. Sure, it’s convoluted, but I always feel like I'm in an actual universe when playing these games. I might not be able to tell you what the hell I’m doing from moment to moment – I’m going to turn on this thing-a-ma-bob, so whats-her-face can extract this codex-doodad from that alien-thingy – but overall, this is epic science fiction.

What occasionally puzzles me about Dead Space is that it should be monotonous. By design, it is a long string of fetch quests, broken up by all manner of creepy crawlies popping out from every nook and cranny. The thing is I'm having too much fun to notice. I’ve said this before, but I never tire of stomping Necromorph heads. Never.

That said, Visceral Games did add in a lot of new stuff to break up the gameplay. The snowy locale of Tau Volantis is far from decorative, as you spend the first bit of the game warding off hypothermia, much like Konami’s 2002 adaptation/sequel to The Thing. I adored the sizable space walk section and the vertical climbing bits were neat, as well. There is also a level – as was glimpsed in the demo at E3 – that takes place inside the belly of a beast.

On the more neutral side of things, some of the mechanics added to Dead Space 3 seem a little superfluous. There is a highly detailed weapon crafting system for which I barely skimmed the surface, as it just seemed to over complicate things. I think it was in there to facilitate EA’s inclusion of micro-transactions. Speaking of which, I really don’t get all the ire about that either. Sure it’s a cash grab, but not partaking in this added content is by no means hampering the game experience, so what’s the problem?

I did have a few quibbles, but fortunately the biggest problem, involving a broken save system, was fixed with an eventual patch. As with Dead Space 2, this game seems to be a little light on the boss fights. When they do happen, they are solid – the final boss battle specifically – but there don’t seem to be as many as  the first game. I also didn’t like that you were only allowed to carry two weapons. You have a giant arsenal of death machines at your disposal, but only end up sampling a fraction of them. It seems counterproductive to me. 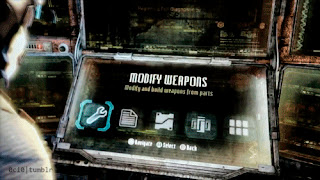 There are several game franchises that yield diminishing returns with each passing title, but I don’t feel Dead Space is one of them. Dead Space 3 may not be as horror-based or innately fresh as when it rolled off the assembly line in 2008, but I’m still having a blast.
Posted by Jay Clarke at 10:00 AM