Despite being hungover as fuck on Tuesday, I dragged my ass to Hamilton's Trash Cinema (not to be confused with Trash Palace) to see a super obscure slasher from 1988 called Carnage Hall. 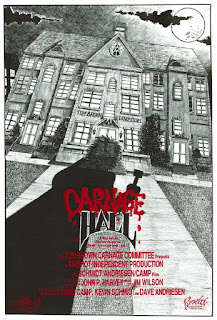 A killer in an Albert Einstein mask dispatches the residents of university dorm during an all-night horror movie marathon.


Filmed on video by a group of students attending Texas Christian University, this is the kind of stuff for which the term “z-grade” was coined. However, that doesn't mean that I didn't enjoy myself considerably, even if I was laughing at it as much as I was with it. I feel like the filmmakers were in on the joke though.


The whole retro/self aware horror movement is all the rage today, so it was a little surreal to see a similarly minded movie of that time. While Carnage Hall isn't a full-on parody, like say 1981's Student Bodies, it does have a good deal of referential comedy. It's completely possible those movie posters and paraphernalia that littered the sets may have already been there before the cameras started shooting. Those trivia game show scenes were certainly pushing it though.

I can't say there was much attempt made at a story here. It was basically just a bunch of scenes and gags strung together, but it did boast a high body count even if the gore was somewhat rudimentary. If this movie had been feature length, it may have been less palatable, but at a scant hour-long I felt it entertained me throughout.


I was surprised that I hadn't at least heard about this movie previously, but then realized while watching why it never got any sort of release. Apart from the pretty snazzy music in the opening credits provided by Jim Wilson, the rest featured instantly recognizable riffs from John Carpenter, John Williams and Danny Elfman. They could've been there for comedic effect, but it's just as likely that is was temp music they never bothered to replace.


Carnage Hall is an amusing little oddity that's definitely worth watching if you are a slasher completist or just get off on silly DIY shot-on-video fare. Just know that you not watching something with any degree of polish. Fortunately, that happens to be my jam! 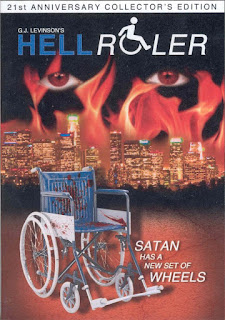 Not only is it about a wheelchair-bound serial killer, but Hellroller also features the trifecta of Mary Woronov, Michelle Bauer AND Elizabeth Kaitan. Try and keep me away!
Posted by Jay Clarke at 10:00 AM

Wait...this really exists? Everyone has pretty much written it off as another 'Gory Graduation'/'Summerhouse Slaughter' hoax. If this is real I wish they'd make it available to view somehow, somewhere. Any filmmaker hopes to make some money off their work I'm sure but if it ain't happening (and nearly 30 years of cobwebs on this one says...it ain't) why just sit on it? Get it out there and maybe trash film buffs will take a shine to it enough to generate interest in a release. Letting it rot in obscurity sure isn't gonna do that.

I'm in 100% agreement with you. I even messaged the director on FB asking to buy a copy, but no response. Maybe he's happy to see it rot in obscurity. Who knows?