All Aboard The Horror Express!

Last Saturday I took part in something really special, the inaugural voyage of The Horror Express. The brainchild of author, programmer & cinephile Kier-La Janisse and named after the 1972 film of the same name, The Horror Express was a bus trip that toured around eighteen Toronto locations used in classic horror films. It was an idea that she'd had for a long time, but was finally executed on the realization that if she didn't do it, eventually somebody else would.

That morning we met at Central Tech, the school used in Mark Lester's 1982 flick Class of 1984 and then all two-dozen of us piled on the bus for which we would be riding around on for the next seven hours.

Hosted by Chris Alexander, we listened to trivia about the film industry in The Big Smoke (which has been booming since the tax shelter era of the late seventies) and watched clips of the approaching locations for comparison. 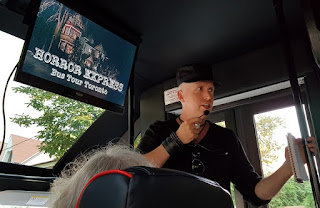 While there were several I was aware of - as some are the stuff of legend - there were also ones that I had no idea about. Like the Curious Goods shop from the Friday the 13th television series was in the Distillery District! 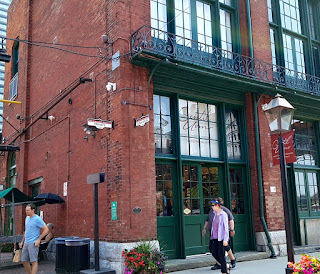 As you might imagine, the works of David Cronenberg featured largely on the tour including locations from Videodrome, The Fly, Crash and The Brood.

Unfortunately, due to a wedding we were shut out of the location used as the Somafree Institute from the Brood, but we did later get up close and personal with the grade school in the film.

Actress (and now real estate agent) Cindy Hinds came along with us on the tour and gave us more than a few tales about working on the film. Being eight when she shot The Brood, her memories are still very vivid.


There was one more school on the tour, as we also went to Hamilton High from Prom Night. 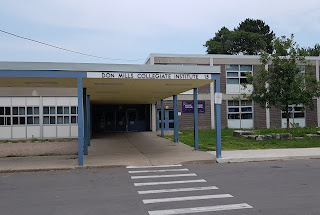 Perhaps the most majestic location on the trip - way out past Canada's Wonderland - was the Black Church from John Carpenter's In The Mouth of Madness. 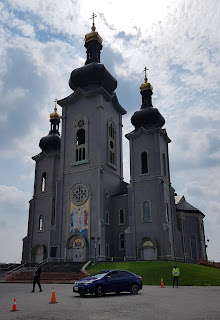 Of course, no tour of Canadian horror locations would be complete without Black Christmas. We checked out a pair of sites from the film, the police station and the iconic sorority house.

The house is now buried behind trees and a wrought iron fence, I wager to keep out rubberneckers like us. Thankfully, my friend Melanie has a much longer reach than I do. 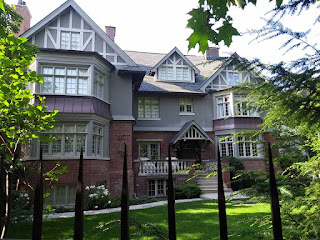 This was a fantastic day and the first of many I expect, as Kier-La is already planning more, here and perhaps even in other cities. It was not only cool to visit so many locations (there were several I didn't even mention) but the camaraderie and shared experience among all of us on the bus was enjoyable, as well. If you able to attend a future Horror Express event, I highly encourage you to do so. Stay tuned to the Facebook page for more details.
Posted by Jay Clarke at 10:00 AM