While I replenish my VHS queue, I'm going to start up this new segment. For those not aware, Eyesore Cinema is one of the last video stores left in Toronto. It opened down the street from the wreckage of the old Suspect Video about twelve years and has since north to Bloor St. It now also has a backroom for screenings that Little Terrors relocated a while back. But enough with the history lesson, here we go.

After seeing Richard Stanley's recent recommendations video I was reminded of a film called The Blood on Satan's Claw from 1970. The title has been in my brain since childhood when I read about it in the first video guide I ever owned. 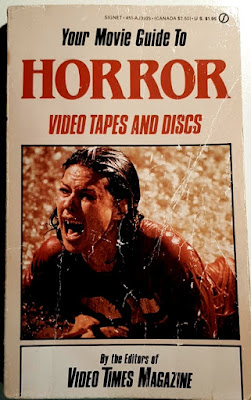 The editors of Video Times Magazine saw fit to give Piers Haggard's period horror piece three-out-of-four stars. Reading this book as a pre-teen I distinctly recall how it mentioned it was also known as Satan's Claw and Satan's Skin, teaching me that movies could have multiple titles.

Anyhoo, I'm inclined to agree with the book in that this was some pretty evocative gothic horror. I guess this falls toward the end of when the Brits were fucking owning this genre. Everything about this felt incredibly authentic, even if the effects were fairly rudimentary.

Haggard did a solid job of balancing all the tropes one associates with this era. Some of it could've even been rather horrifying, but growing up in an English household, I can't hear an angry mob yell “Witch!” without thinking of Monty Python.

Being set in a small village, the cast was rather large and both leading ladies (Linda Hayden & Wendy Padbury) absolutely lit up the screen as totems of “evil” and “good” respectively. I also have to mention the theme by Mark Wilkinson, as it has become one of new favourite instrumentals.

After watching Satan's Claw, I came away with two questions. First, how the hell did any women live through this era, and why were dudes so terrible at saving damsels in distress? Like, what the fuck Ralph? How were you just running through the countryside for five minutes while Zoe from Doctor Who was getting slaughtered? Weak sauce.

I'm glad I waited thirty-five years to finally see this, as I don't think I would have appreciated it nearly as much as I did now.
Posted by Jay Clarke at 10:00 AM