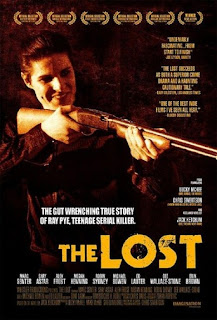 One day while camping Ray Pye decides to murder two women. With the help of his friends, he covers up the crime, but several years later, he appears dangerously close to snapping once again.
I have to start by saying that I have never read a Jack Ketchum novel, so I have no insight on how this movie portrayed the original subject matter.
Because, in short, I did not like this movie.
When The Lost started, things were looking up when cutie Erin Brown (aka Misty Mundae) showed up in the buff thirty seconds in. That, unfortunately, was the best things got.
Ray Pye (played frenetically by Marc Senter) was a cross between Crispin Glover and a Tasmanian devil. It was uncomfortable to watch at times. Even more irksome was the fact that every hot girl in town, save one, seemed to view Ray as anything other than what he was – a total douchebag. The actions of the Katherine (Robin Sydney) character - when I realized there was no ulterior motive – were especially ridiculous. Michael Bowen, who you’ll recall as Buck from Kill Bill, was great as the small town detective. You know what, fuck it, the performances all around were actually pretty solid.
Every time I thought I had a handle on where the story was going, it would one eighty. River’s Edge? No. Blue Velvet? Nah. Hard Candy? Nope. I understand the erratic nature of the film was deliberate – and it wasn’t just Ray’s behaviour, the editing was equally off putting. Even the time period was odd. At some points, it seemed like it was the sixties, in others, the eighties. This could have all worked, but the narrative was way too out of place for a true crime story, which is what I took this film to be. However, I am still conflicted. There are a lot of individual reasons why I should have liked - or at least appreciated – The Lost. And then…
The last twenty minutes is where it goes in the shitter. It had been teetering on the brink towards the end and the ensuing craziness just pushed it over the edge. It seemed that it just went out of its way to be vile and tasteless. I’ll never forget the collective sigh of disgust the audience I saw it with let out at the conclusion – as if to say... “Really guys? You went there?”
I don’t know. I’m guess I’m just not the nihilist I used to be.
Posted by Jay Clarke at 12:45 PM