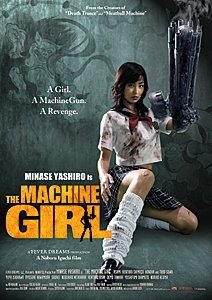 One of my very first posts here was about this magnificent Japanese trailer for an extravaganza of gore called Machine Girl. Well, this past weekend I was lucky enough to catch it at The Royal in Toronto. It was the closing film of the Over The Top Festival that was running all last weekend. It was a midnight show, but it didn’t actually get rolling until quarter to one though. Apparently, Crispin Glover hijacked the theatre, as his film It Is Fine! Everything Is Fine was playing before it and he was mingling in the lobby. That’s all right though. I was in no hurry.


Machine Girl was a blast. If you watched the trailer, you can get a sense of what you are in for and it certainly delivers. It is equal parts grindhouse, cheese and hyper-violence like only the Japanese can provide. They have refined the ridiculously random into a fine art. Watching a couple of Japanese cuties slice up countless Yakuza is time well spent on a Saturday night as far as I’m concerned. Machine Girl gets released on DVD June 3rd, so if the trailer strikes your fancy at all, I recommend you check it out.

I’m totally stoked for the company Fever Dreams’ next venture, Tokyo Gore Police. From the trailer, it totally looks like they (somehow) managed to raise the bar. See for yourself.
Posted by Jay Clarke at 6:34 PM