I wanted to wrap up Rat Week with something a little more modern, but that was easier said than done. Apart from the 2002 TV movie The Rats starring Mädchen (you’ll always be Shelly the waitress to me) Amick, rat flicks are all but extinct. That was until last year’s Mulberry Street.

Mulberry Street is the baby of director Jim Mickle and writer/star Nick Damici and was one of the better offerings at the Toronto After Dark Festival last year. If I’d started The Horror Section even six months earlier, you’d have heard about it then. 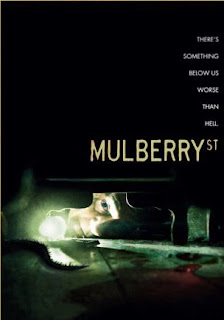 A viral outbreak transmitted by rat bites is turning people in flesh eating creatures, throwing Manhattan into chaos. The tenants of a rundown apartment complex barricade themselves in against the infected outside. But, will they last long enough until rescue arrives?

The low budget underpinnings are obvious (CG fire anyone?), but there are several things about Mulberry Street that rise above that. The biggest of these is the time spent on character development. This is done remarkably well and also helped by solid and natural performances all around. I think the strength of this lies in the fact that a lot of them were based on actual people Jim and Nick encountered from their many years in The Big Apple. It's all this attention to character that makes you feel a bit sad when they start getting picked off. Not that I’m saying that some of them don’t commit the usual genre clichés, but they are ultimately forgivable. I have respect for filmmakers who just try to play a movie straight in this day and age. 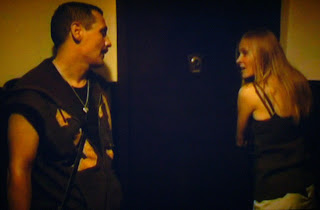 The ‘wererat’ effects are pretty rudimentary with darkness and speeding up the film used to cover up this fact. This is probably the weakest part of the movie, but not a deal breaker. Mulberry has a good deal in common with [REC] (one of my faves from last year), but Mulberry is grander in scope and doesn’t share the first person camera approach. The music provided by Andreas Kapsalis is also well suited to the material.

Nick and Jim are also real standup guys. Mulberry was the opening film at After Dark and they were both in attendance. At the party afterwards, I got to chat with Nick a bit. He was very humble and talked a lot about how he loved Canada and how different we were from The States.

Mulberry Street is a good little movie. It is a zombie/killer rat hybrid that was clearly influenced by the works of George Romero.
Posted by Jay Clarke at 2:07 PM

You pretty much sold me with that last line.