It's that time again for my wrap-up of the best and worst genre titles of this past year. Again, there were a good handful of titles in 2010, but finding five that stood out was a little tricky. Here are the ones I came up with, in no particular order.

I had been a fan of Green's after Hatchet, his love letter to eighties slashers, but I never could've expected this powerhouse of a chiller. I was into this thing from the get-go. The idea was simple, the three characters were well realized and the dialogue was so wonderfully fresh that I couldn't help but feel I was right up there with them. There is a maturity to this film that shows that Green is a talent who is determined to stay at the top of the pile.

As I've said, I think my first reaction after seeing this at TIFF, was relief. Reeves not only managed to honour the original Swedish film by maintaining the stunning visuals and equally great performances by Kodi Smit-McPhee & Chloe Moretz, he also injected his own experience of growing up as a lonely kid in the eighties. While it is true that there is some unfortunate CG in the film, some of the other subtle tweaks further invigorated the narrative immensely. This is a rare remake triumph that I feel fully earns its existence.

After Mickle's debut in 2007 with Mulberry Street, I had high hopes for his follow-up and they were all met entirely. This part-vampire apocalypse, part-modern western tale is brimming with well rounded characters, awesome set design and a wonderful score to boot. I hope that Mickle continues his partnership with Glass Eye Pix because they made some magic together on this picture.

Ryan Reynolds' one-man show makes my list of top genre films and rightly so. This is a fantastic showcase of not only Reynolds' talents, but also the power of minimalist filmmaking. Director Cortés' decision to never leave the coffin was inspired and really heightened the sense of dread and claustrophobia that the main character felt. Buried is a solid character piece that cements Reynolds as an A-list talent and not just a pretty face. 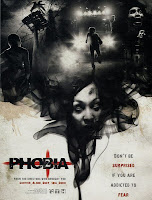 The follow-up to 2007's anthology Phobia was even more solid than its predecessor. It has a gradual progression of scares and then leaves you laughing with its most entertaining yarn, “In The End”, which is a follow-up to the first film story, “In The Middle” featuring the same bumbling characters. Thai horror has been slowly fading from the international scene, but Wongpoom & Pisanthanakun are clearly still hard at work at bringing the scares.

Looking back at this list, I was surprised to see that four-out-of-five were actually domestics this year. Could we be seeing a quiet American resurgence? I hope so.

I've found the work of James Wan & Leigh Whannell to be largely mediocre. I have mad respect for what they achieved with Saw, but let's face it, the final product left a little to be desired. I've never felt that Wan has been able to nail the third act – until now. His newest offering Insidious, was a fantastic haunted house story that focused on atmosphere, rather than his usual wheelhouse of gore. It is actually astonishing to me how much Wan & Whannell have grown as filmmakers since their last effort. I have no idea when Insidious will be getting a release, but make sure you support it, when it does.

I had a blast watching Piranha 3D. Aja delivered on every bit of the gore, tits & ass he promised from the trailers. It was just a fun ride filled with skin, cheese and vapid characters you couldn't wait to see torn to shreds by angry aquatic death machines.

I was also surprised by two films in particular this year. The first was Paranormal Activity 2. What could've been just a cash grab, was a well realized sequel that I found not only technically superior, but also served the first film very well. The second was The Last Exorcism, which anchored by its two amazing leads, Patrick Fabian & Ashley Bell really impressed me. Its emphasis on character and build-up works well with its found-footage conceit. It is a shame this movie was mismarketed, as I don't think it got a fair shake with audiences.

Lastly, I want to say that even though The Girl With The Dragon Tattoo and Black Swan would not be what you would technically call horror, I feel that they were two of the best films I saw this year period.

Okay, now onto the worst. As with previous years, I had a good record of avoiding stuff I knew I wouldn't like, so there will be no Nightmare remake, no My Soul To Take or Devil on this list. There were however, some disappointments. I was completely unimpressed with Hatchet II, especially after seeing Green's awesome Frozen just a few months before. I understand why he made it, but it felt very flat and cheap to me. Brad Anderson's newest Vanishing on 7th St, was also painfully mediocre. I'd like to blame it on his choice to cast cardboard leading man Hayden Christensen, but the movie just had no pop on any level. However, if I had to nominate a lead stinker this year, I guess I'd have to go with Skyline, which I might add was not my choice to see. This movie is basically a demo reel for the filmmakers special effects talents because there was nothing that made a decent movie here otherwise. The ending is laughable and framed for an inevitable sequel that you can be sure I will not be seeing.

All righty, that is another year in the books. 2011 looks to have an exhaustively crammed calendar, so check back next year to find out what I am most looking forward to.
Posted by Jay Clarke at 12:15 PM