A few weeks back, I posted about this awesome looking DVD set called Video Nasties: The Definitive Guide. Well, rest assured I jabbed that bad boy’s contents into my eyeballs faster than you can say ‘Lucio Fulci’. Here’s the verdict. 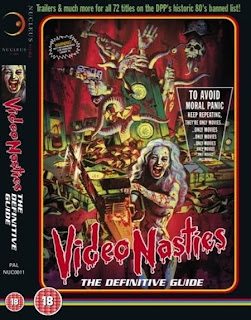 If there’s one word to describe this DVD set – aside from my go-to superlatives ‘wicked’, ‘epic’ and ‘awesome’ – it is value. This is not false advertising. They crammed these discs with so much stuff, it literally took me three solid evenings to get through it all.

The presentation of the DVD is brilliant. The amount of love that went into this set is astonishing. Along with the great cover, it also includes a few lobby cards of some of the more infamous Nasties like Cannibal Holocaust and I Spit On Your Grave.

The centerpiece of the set is Jake West’s documentary, Video Nasties: Moral Panic, Censorship and Videotape and it’s a treat to watch. While it is mainly talking heads & newspaper clipping montages, being a UK documentary, it features a lot of new faces. I have no problem with John Landis or Eli Roth popping up in every homegrown horror doc made in the last five years, but it was nice to get some fresh perspectives. In particular, I speak of horror writers Alan Jones, Marc Morris – whose book The Art of the Nasty served as the genesis of this set – and Stephen Thrower. I’d been reading their books for years, but had never actually seen them onscreen before. The latter gentleman is of special significance to me because of his work as a musician in the band, Coil. Other interviewees of note were British actor Andy Nyman, who I think after memorable performances in Severance & Dead Set could be as popular this side of the pond as Simon Pegg with the right project, and directors Christopher Smith and Neil Marshall. 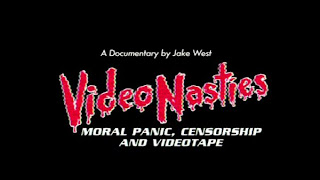 I’ve always been fascinated by the censorship contrast between North America & Europe, or more specifically the UK. Over in the motherland, nudity is commonplace, with topless girls featured in the daily newspaper and TV commercials, but graphic violence in media seems to be carefully monitored. Over here, you’d be hard pressed anymore to find a movie – no matter how reprehensible – that is rated NC-17. Even network television is constantly pushing its boundaries. However, flash a nipple on air and the whole continent shuts down.

Obviously, you would expect the documentary to take the side of the filmmakers, but honestly, they didn’t have to try very hard to make those who lobbied against said films look like idiots. The following is an actual quote from British MP Sir Graham Bright;

“I believe that research is taking place and it will show that these films not only affect young people, but I believe they affect dogs, as well.”

This is from the mouth of somebody in a position of authority? What the fuck was going on back then? Though, as I say that I realize that political ineptness is still rampant these days. This only reinforces the truthful adage, the more things change, the more they stay the same. Moral Panic, Censorship and Videotape highlights the fact that the powers that be will always look for a scapegoat to explain away the problems in society. More recently, it is violent video games that have become the target of those who think they know what’s best for us. 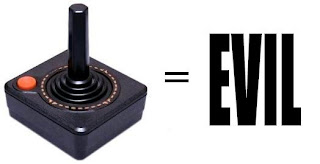 Ironically, due to the BBFC’s assertion of “do not watch these films”, all they really did was increase demand. I guarantee there are a handful of Nasties, that would have been completely forgotten – and rightly so – if they had not been immortalized by their inclusion on the list. It became the best marketing tool the distributors could’ve asked for.

Let’s get back to the DVD though. Also on the first disc, is a gallery of coverboxes of all the banned films, which you can imagine to me, was like crack. And if that wasn’t enough, there is a montage of UK video distributor intros, my favourite being the one below for Kace International.


I love that one. It’s like its own little movie. It makes me want to say, “fuck the movie I rented. I want to see more of this!” And these intros go on for almost an hour!!! Like I said. Value. If this was everything, I would have still said it was a well worthwhile purchase, but there are two more discs.

You also get trailers for every single one of the seventy-two titles that appeared on the Video Nasties list with each prefaced by an introduction. The second disc features the thirty-nine titles that were successfully banned by the courts and the third has the thirty-three that managed to get their verdicts overturned somewhere down the line. To further drive home how thorough this package is, even the main menu screen features a lengthy short featuring Jake West muse Emily Booth destroying video tapes with all manner of deadly weaponry.

I was obviously familiar with a lot of the stuff on here, like the old faves from Fulci & Argento – who had five titles on the Nasties list between them - but there was also a fair share of recollection involved, as well. Since there were copious amounts of Italian titles on here, it reminded me of all their badass music scores. I should really try to create some sort of mix with all those old tunes ala Deadboy’s recent Halloween mix. I mean, just take a listen to this trailer for Bay of Blood aka Carnage.


Of course, the best part was discovering new titles. Much like after my experience watching Not Quite Hollywood and Machete Maidens Unleashed, I came away with a few more to track down. Axe and Late Night Trains were added to the likes of Nightmares In A Damaged Brain and The Slayer, which I’ve already been trying to find for years.

Then there are the ones that I seek for a different reason. Because they look freakin’ hilarious.


It should go without saying that Video Nasties: The Definitive Guide is a must-own for any horror fan. If you are a child of the home video generation, this will offer you a tidal wave of nostalgia. If you are a wee bit younger, it will serve as a fantastic history lesson on a glorious era in horror.
Posted by Jay Clarke at 10:02 AM

Sounds amazing! If only I had the money to order it.

When I am back in Canada, I will have to borrow this from you.