It's funny how some of these random get-togethers come about. I have a friend who does shift work, so Mondays are really the best day she can hang out – at least for the foreseeable future – so they have ostensibly become the new Thursdays for us. Then, another friend recently won Larry Cohen's The Stuff on DVD in a raffle, so you put the two together with our shared love of nachos and you have a winning combination. 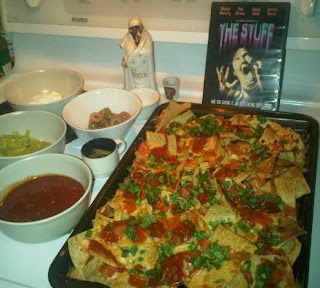 So, the movie. I remember liking The Stuff when I saw it some twenty-odd years ago, but this movie is even more entertaining than I recalled. There is just such an element of fun in Larry Cohen's horror flicks with Q: The Winged Serpent being another prime example. I believe this is in no small part due to star Michael Moriarty. This guy is great because he often acts like he's in his own movie, adding all these mad little quirks to his character, that must have been improved on the day. They just had to be. The scenes with him and the late Garrett Morris, as the unforgettable sass talkin', kung-fu choppin' Chocolate Chip Charlie, are just really special. 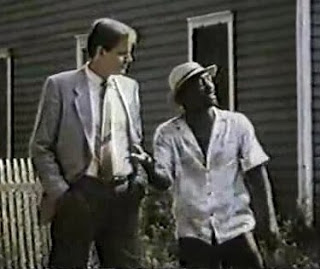 I think the world is a lesser place for there never having been a Lethal Weapon-style buddy cop movie starring those two. The Stuff, more than most eighties flicks, is a veritable time capsule. Everything, down to how things were marketed in that decade, is on display here. Cohen even got the “Where's the Beef?” lady to show up in a cameo declaring “Where's the Stuff?” That's just awesome, people. The Stuff trots out a parade of character actors, including Danny Aiello, Patrick O' Neal and Paul Sorvino as an unhinged military leader, as well. When I see creature features like this, it always makes me yearn for the days when practical effects were paramount. I love good CG as much as the next guy, but it has still to achieve the weight of actually having something onscreen, no matter how cheesy it looks. 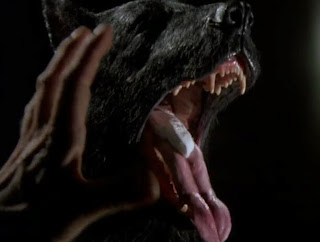 So, the movie was a success and the nachos tasty, but the evening could of course not have been complete without dessert! 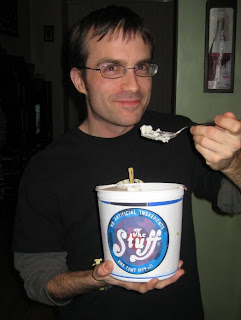 Chocolate Chip Charlie is awesome! The Stuff is a classic for sure. Always made me hungry for Yogen Fruz. Doubt adding clips from the movie to their advertisements would benefit them though..