Sad news this week, as we lost two cinema icons. The first was filmmaker Jess Franco, who passed away in Spain on Tuesday at the age of 82. With 199 directing credits spanning seven decades, he was one of the most prolific genre filmmakers in history. Though a good number of them weren't exactly winners, I have fond memories of watching some of his more stimulating pictures like She Killed In Ecstacy and Vampire Lesbos on late-night television and his flick Bloody Moon is among my favourite examples of slasher sleaze. It is depressing to hear another one of the old guard has left us, but at least his legacy with live on. The second loss this week was film critic Roger Ebert, who passed away Thursday. He was 70.

Siskel & Ebert's At The Movies was extremely important to me as a youngster. Apart from the fragmented glimpses I got from all-too-brief TV ads, their show was really the only place I got to see clips of the newest horror flicks. I can still remember when they covered Halloween II. I recall they weren't exactly impressed, but I vividly remember the clip they showed was where Karen (Pamela Susan Shoop) answers a room buzzer and gets jumped by Bud (Leo Rossi). I wasn't able to find that review on line, but here's a very favourable discussion about its predecessor.

There were a bunch of trailers released this week, so let's go through a few of them, shall we?

I find this one a little confounding. Even if I did suspend my disbelief, the logic of this setup still seems flawed. I'm having a hard time wrapping my head around how giving psychopaths a day pass will lower unemployment and improve the quality of life. Perhaps Universal wanted the feed off the buzz of Lion's Gate's upcoming You're Next by making their own home invasion thriller with masked antagonists. The  difference is, I want to see You're Next (again).

Yeah, this trailer isn't really selling me. I love Moretz and Moore, but the only thing that seems different than the original are the visual effects. Like I said, not selling me.

I think I can get onboard with this. A thirteen episode run will allow this project to take its time and not rush things like most of King's television adaptations. Most of the cast are unknowns to me, so they'll be blank slates in a sense. So, yeah. I'm kind of excited for this. One of three ain't bad, right? 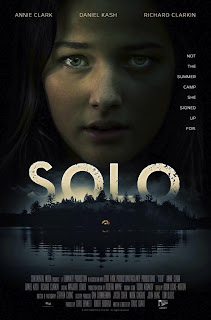 The movie centers around a camp counsellor whose initiation involves spending two nights alone on the camp's island. Of course, the tension mounts when she realizes she may, in fact, not be alone. Okay, show me more.
Posted by Jay Clarke at 10:00 AM