Hey all. This is a pre-recorded Messenger post, as I am currently recovering from my Shock Stock pilgrimage. Here's hoping I made it back from London okay after that midnight screening. Anyhoo, a lot happened this week...


We lost yet another icon in the horror community this week. Stuntman Richard Brooker, best known for portraying Jason Voorhees in the third Friday the 13th movie, died this week at the age of 58. He was, of course, the first to wear Jason's trademark hockey mask and the only one to kill in 3D! Here below is a sample of his handiwork.

Here are two things that caught my eye this week. The first is some lovely weaving from artist Sabrina Parolin. 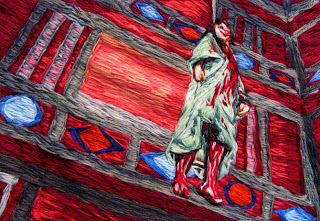 The second is this bad-ass action figure from a company in Japan. 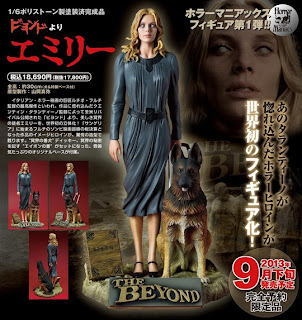 Awesome, right? Yeah, it will only set you back one-hundred-sixty bones!

So, a few months ago, Charles Band posted a video about finding a bunch of original VHS big boxes in his warehouse, which he is now selling on his website. It was a find that seemed too good to be true. Well, Paul from VHSCollector.com is maintaining that is, in fact, the case. Earlier this week, he posted this video.

After this damning evidence, some came forward to defend Band, including Fangoria editor Chris Alexander. He posted a video of his own comparing Demoniac releases, as well as getting in touch with Band himself for comment. Soon after, Alexander posted a voice mail of Band addressing the validity of his claims.

In response to this, Paul posted another video, which pretty much shot down those points, as well.

In the end, you have to take Paul's advice and just “look at the evidence and decide for yourself”
Posted by Jay Clarke at 10:00 AM