Where Is Jessica Hyde?

I made a wonderful discovery last Friday evening that I'd love to share with those currently unaware. By way of UK blogger Wesley Williams, I heard about this new show called Utopia on Britain's Channel 4. Less than twenty-four hours later, I had devoured all six episodes.

Simply put, this show is excellent. I was hooked immediately, as Utopia has one of the best pilot episodes I've seen since perhaps Lost. It puts its DNA right up front, quickly showing you that it's not playing around and not like anything else on the small screen. If I were to break it down into buzz words, I'd say Utopia is complicated mix of Ben Wheatley, David Lynch with a sprinkle of Broken Saints, a web series from the mid-2000's. I was seriously shocked that Wheatley wasn't involved in this production somehow because his fingerprints are all over this. It is not just that Wheatley alumni Michael Smiley and Neil Maskell appear, but also the show's penchant for sudden bursts of brutal violence and overall tone of jet black quirk. Speaking of violence, The Brits continue to surprise me with how much they get away with. Channel 4 isn't HBO, it is public television, and yet it features all manner of grisly mayhem.

I want to make things clear here. It was not only the subject matter that grabbed me. This is a full package deal, as every facet of this production is something to behold. The visual palette of Utopia, in brilliant contrast to its dark themes, is vibrant and colourful with framing that will make you want to reach for the remote. 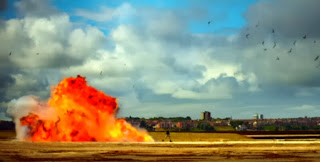 Additionally, enough cannot be said about the music by composer Cristobal Tapia De Veer. The score is eclectic, and his choice to mix in sounds not usually associated with music scores – like breath for instance – was ingenious. It will not leave your head for days once it is locked in.


The main thing that distinguishes Utopia from the stuff going on this side of the pond is the ensemble cast. It is unlikely that a show like this would ever exist here. As for the subject matter, not since the popularity of Twin Peaks and The X-Files brought forth such boundary pushing and out-of-the-box thinking shows like Nowhere Man, VR.5 and Millenium, has there been anything quite like this.


This show is dynamite. It aired earlier this year around the same time as the second series of Black Mirror, so I'm kind of surprised I missed it. Oh well, better late than never. I have to echo Williams' comments about getting on board this show now before it goes off into the stratosphere. A second series has been ordered, so there will thankfully more Utopia coming in the future.
Posted by Jay Clarke at 10:00 AM