Hey gang! It is not only a special occasion because this is the two hundredth edition of Don't Kill the Messenger, but tomorrow is also the sixth anniversary of The Horror Section. Each milestone that goes by I marvel at the fact I've managed to stay at it for so long. A good chuck of my motivation is the constant good will I receive from you guys, but mostly it is just that I have to. By now, it is habit and deeply ingrained. Anyhoo, I've got a super-sized news post for you, so let's get on with it.

The first highlight of the year is always the midnight lineup at the Sundance Film Festival. For 2014, it looks like there are more than a few corkers. Here's a sampling of some that caught my eye.

Aussie director Jennifer Kent brings the scares in The Babadook about a single mother protecting her child from a malevolent force inside her house.

Cooties looks to be a sort of reverse version of The Faculty as a band of teachers battle for survival after a mysterious virus turns the student body into vicious savages. It stars Elijah Wood, Alison Pill, Rainn Wilson & Leigh Whannell, who also co-wrote the screenplay.

Tommy Wirkola follows up his Hollywood Hansel & Gretel picture - which imho was way better than it should've been - with a sequel to his fan fave Dead Snow. Entitled Red vs Dead, this one sees the survivor from the first film battle the Nazi undead for all the marbles.

Perhaps my most anticipated of this lineup is the new film from Adam Wingard & Simon Barrett. The Guest sees a soldier contacting the family of a fellow comrade killed in action, only to find all is not what it seems. These guys are at the top of their game right now, so I can't wait to see their next project.

The Japanese/Indonesian co-production Killers sounds like a recipe for insanity as two serial killers log their crimes online in an effort to one-up each other. Co-written by Timo Tjahjanto, who made the batshit crazy VHS 2 segment Safe Haven earlier this year, I am now expecting big things of this.

I am happy if there are one or two titles to take away from Park City, but this year has over six I'm chomping at the bit to check out. The 30th edition of the Sundance Film Festival runs January 16th to 26th. For more info, click here.

There's a Kickstarter campaign going on right now for an exciting new documentary about movie poster art called 24 x 36. A few months ago, a company called Post No Joes made a short featurette about artist Ghoulish Gary Pullin. They had so much fun making it that they decided to make a full doc about him and his creative brethren. Here's the video pitch below.


You still plenty of time to give generously, and the rewards are plentifully awesome. Click here to get more info.


The Carpet From Another Place.


I love this little mash-up drawing from artist Jared Lyon. 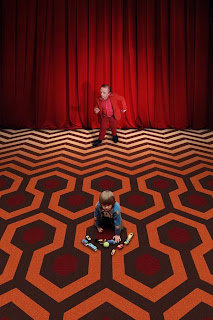 A few weeks back, I talked about discovering a set of old books written by Alvin Schwartz called Scary Stories to Tell in the Dark. Well, it appears I wasn't the only one as Saw scribes Patrick Melton & Marcus Dunstan are planning on turning it into an anthology for CBS Films. According to the press release; 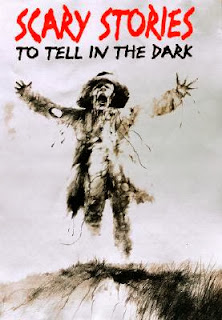 “Dunstan and Melton will adapt some of the Scary short stories into a screenplay about a group of outcast kids who stand up to their fears to save their town when nightmares come to life.”

It sounds a lot like It, but there are no shortage of great source material to pull from, so a skilled hand should be able to make this work. I look forward to seeing these folk tales made flesh.

Here's an crazy ad from Japan. It is supposed to be an for snow tires, but I think it could easily just make you want to sell your car and never drive again.


It is not quite as clever as the Exorcist parody from Germany a few years ago, but it is certainly a commercial you won't soon forget!

Here's a few more things I wanted to mention. After many years of waiting a trailer for Nurse 3D finally popped up online.


Yeah, so maybe not quite as excited as I once was. Maybe it's just from hearing all those Paz Vega horror stories over the past few months. They sure did pick the best possible screencap for that YouTube video though, didn't they?


However, here's something I AM excited for - the next project from the Resolution guys from Aaron Moorhead & Justin Benson. Entitled Spring, Twitchfilm reports that it is about “a young man in a personal tailspin as he flees California to the Italian coast, where he meets a woman carrying a dark secret.” Here below, is the first still from the film.

Lastly, Guillermo del Toro is now in production on his television adaptation of his book series The Strain. Here below, is the recently released rat-tastic teaser.