Over the last few years, you may have heard me talk about The Laser Blast Film Society. It's basically a rag-tag bunch of Toronto cinephiles that get together (fairly) regularly, watch a couple of flicks, then sometimes record a podcast. I'm a regular to this festivities and seen a lot of flicks that I likely never would've otherwise.


Well, last week, the LBFS made the leap from living room to theatre, as it has now become a monthly series at The Royal Cinema. Founding members Justin Decloux & Peter Kuplowsy (with the help of Royal programmer Colin Geddes) have set their sights on bringing some of the crustiest titles of the home video era to an unsuspecting public. In their introduction last Wednesday night, the dynamic duo laid out their plans for world domination.

Peter:“Our goal is to focus on films of the home video era, specifically the ones that were made for the direct-to-home-video market. And we'll be screening them on the big screen in glorious VHS. The way they were NEVER meant to be seen!”


The inaugural film of Laser Blast's new incarnation was Tim Ritter's 1986 effort Truth or Dare? A Critical Madness. This was a film of which I was aware due to its coverbox, but one I'd never actually sat down and watched. I'd recently only become aware of Ritter after seeing a Horror Remix of one of his other “gems” Killing Spree. 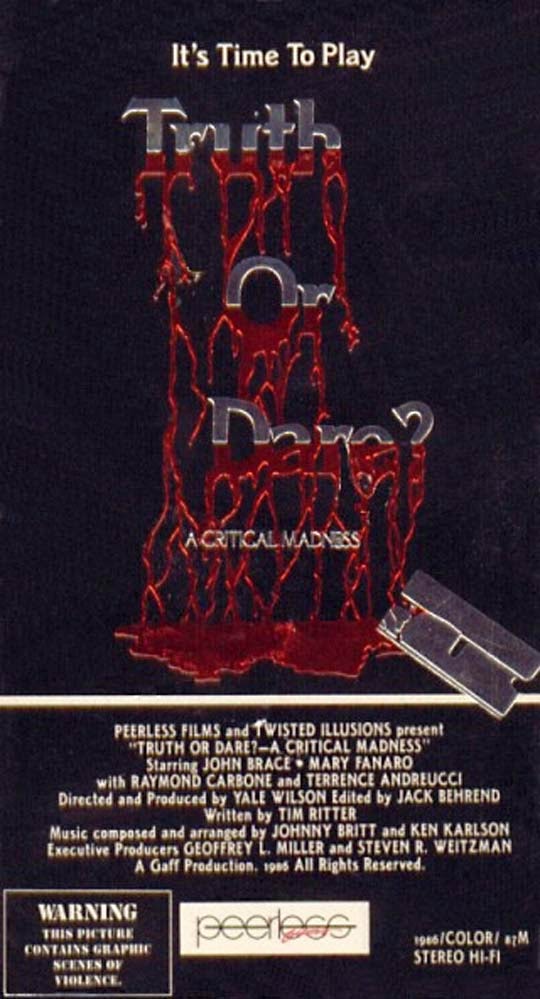 Truth or Dare? is a blast. Though it has all the hallmarks of ineptness, including long stretches of nothing, blatant over-acting and a ridiculous plot, it also does a lot of things that most low budget films don't have the balls to do. Ritter was just eighteen years old when he managed to convince a production company to give him two hundred thousand dollars to make this film. It certainly doesn't look like it cost anywhere near that much, but it does has its share of gore, explosions and car chases. The main character's iconic copper mask is rather striking and I wonder if perhaps Rob Zombie drew inspiration from this movie while envisioning his version of Michael Myers.


This was a great screening. There were several of the original Laser Blasters in attendance, in addition to a few dozen newbies. That was more than enough to get the place rocking with a title like Truth or Dare? I'm certainly glad I watched this now with a crowd after a few wobbly pops, instead of just casually ingesting it twenty years ago. The guys even had some faux VHS sleeves made up, featuring original artwork by local artist Trevor Henderson.

I've spoken with Peter at length about some of the titles they intends to play in the future, and I'm super excited for what they have in store. I haven't even heard of some of these oddities, so it just goes to show you, that the vast era of home video has seemingly unending treasures to share.


If you live in the GTA, I urge to come to the show next month. Especially if you're a fan of the terribly cheesy action flicks spit out by PM Entertainment in the nineties. Check this shit out!