One of the films I was most looking forward to at this year's Midnight Madness was Turkish director Can Evrenol's debut Baskin. 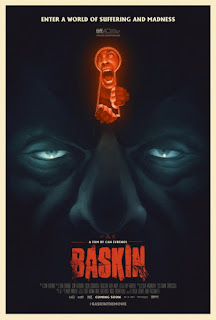 A squad of police officers respond to a distress call, only to find they've entered a doorway into hell.

I'm sad to say that I was left disappointed when the credits rolled on Baskin. I dug the 2013 short of the same name, as it was one of those rare occasions where I thought it was a piece that could be expanded on. It teased of a world with a rich mythology and obviously many other people thought so too, because two years later, here we are. However, even now with its extra running time, I don't feel the mythology, which was nicely set up at the start, was fleshed out as well as it could have been. I did like the long dialogue scene between the two main characters (that my friend aptly compared to the diner sequence in Mulholland Drive), but overall there just wasn't enough meat.

Evrenol did spend a lot of time developing his characters at the beginning, but I felt that the film pretty much ground to a messy halt once the main antagonist showed up. The actor (Mehmet Cerrahoglu) who played The Father had an extremely unique look, but I felt he, and the entire last half truth be told, hit a level and stayed there throughout. I was hoping for Event Horizon levels of hellish chaos in this film, but it didn't quite get there. The resolution was also too quick and not nearly as clever as it probably thought it was.

I also thought that the score was very overbearing. I found it strange that during the Q&A, Evrenol quoted It Follows as an influence, because the music in Baskin was nowhere near as complimentary as that score was. If anything, it was a detriment at times.

Despite all of this though, Evrenol should still be proud of what he accomplished here. Turkey is not known for its horror movies, and this one should at least put them on the map. It is also impressive what they were able to put onscreen for under a half-million dollars.

Perhaps my expectations were a little high based on the potential of its premise. It is also possible that the Madness film the night before, the exceptional Green Room from Jeremy Saulnier, set the bar too high. In any case, hell is what you make it, I guess I just wanted a little more variety and extremity with my fire and brimstone.
Posted by Jay Clarke at 10:00 AM