Put The Mask On, NOW!

In addition to the already jammed lineup of horror films that were screening downtown the last week of October, the Lightbox also saw a run of the newly restored 1961 film The Mask. In case you're not aware, this was not only Canada's first feature filmed in 3D, but also the Great White North's first venture into horror. So naturally, I made catching this little piece of history a priority. 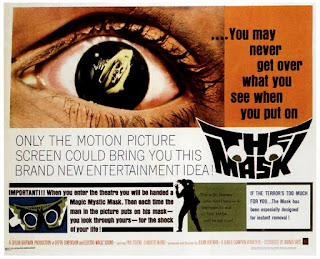 On our way into the theatre, we were given our 3D glasses-- 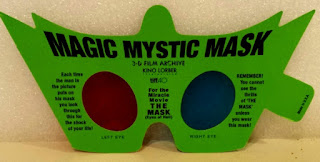 These are presumably similar to what audiences would have received back in the early sixties, which was a nice touch. Only about fifteen minutes of the eighty-and-change was actually in 3D, which suited me fine, as pressing those things up to my glasses for an hour and a half would've been a bit of a buzzkill. I did love that shtick of when the person onscreen puts on the mask, you put on the mask though. It's pretty brilliant in that Bill Castle kind-of-way.

As for the film, I found it quite entertaining. The effects were cheesy at times, but the visual flair of the dream sequences, designed by Slavko Vorkapich, were some pretty great stuff. The 3D layering worked better than the effects that came out of the screen, but I feel they all came across rather well considering the tech is over fifty years old.

Put your Mask on, NOW!


Despite the film being very dialogue heavy, I still found it quite engaging. I couldn't help but feel that Jacques Tourneur's film Night of the Demon, made four years previous, was an influence, both aesthetically and thematically. The pallate of smoke and shadow was similar, as was the large, imposing antagonist (demon or mask) looming overhead.


Both have films that switch protagonists early on, and are victims, directly or indirectly, of evils invoked by ritual. Whereas Night of the Demon was pretty straightforward, I think The Mask's underlying comment on addiction was very provocative for a film that was basically just trying to cash in on the 3D craze of the day.

Canada has always been known for putting out solid horror content, but it's good to know we started out strong with this bewitching entry into the gimmick horror canon.
Posted by Jay Clarke at 6:00 PM