Hey all. Everything appears to be back to normal here, so fingers crossed. I got some really cool stuff for you today, so let's jump in.

Word came down a few days ago that Bilbo's Texas Landmark, the gas station used in the classic horror film The Texas Chain Saw Massacre is being turned into a BBQ restaurant.

The brainchild of businessman and TCM superfan Roy Rose, he also plans on setting up some rooms in the back for those brave enough to stay the night. In recent years, the Landmark had fallen into disrepair, so I'm very glad someone stepped up to preserve this important piece of horror history.

I saw two awesome pieces of horror merch this week. The first are these Hi-Top Critters sneakers from TeeAmazing. 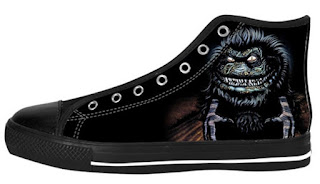 Oh yes, these babies can be yours for $55.95USD. Click here to order. The second thing is this absolutely sweet set of playing cards.


The proceeds from these limited edition cards will directly fund Autism research. You can be sure I was pre-ordered a deck of these the moment I finished the video above, and so can you by going to Cultzilla here.

Maestro John Carpenter has released a follow-up to last year's Lost Themes, with the simply titled Lost Themes II. Check out the opening track below.


You can also stream the entire album over at NPR. I'm still holding out hope that Carpenter comes to Toronto with his live show in the future, but until then...
Posted by Jay Clarke at 11:32 AM