Last Tuesday night, The Black Museum held its third debate, this one featuring a quartet of pairs arguing the Greatest Final Girl. It was a rather contentious affair that saw the closest contest yet. 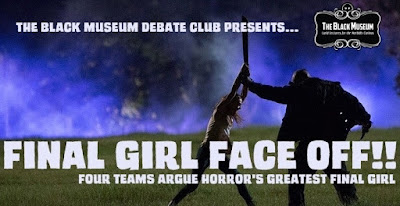 This one was a little different for me, as two weeks out I became a part of it after debate regular Steve Kostanski had to drop out. This involved me doing a shit-ton of research and when the time came, I actually forgot to record the damn thing. So, alas I won’t have any quotes this time around, but I can still give you the gist of what went down.

This iteration of the Debate Club saw some more new faces in addition to my own. Here were the teams fighting for their chosen character's honour.

Taking over judging duties from Stuart “Feedback” Andrews was another Rue Morgue alumni in Liisa Ladouceur. After some event housekeeping, the opening statements got underway.

Team Thomasin came out strong right of the gate. Due to their unorthodox choice, they had to immediately convince everyone that she was indeed a Final Girl. To do so, they went about listing all the ways she met the criteria laid out by the originator of the term Carol J. Clover. They then put forth the clever idea that Thomasin’s family in the film were the oppressors and the rejection of their puritanical ways was her particular triumph over adversity.

Team Sally took a more literal approach. We had to lean on the fact that Sally was the pioneer and also cribbed passages from Clover’s tome to back up she was the truest definition of a Final Girl. Mainly we argued that Chainsaw was the most dramatically potent, and Sally endured the worst of all the characters being discussed.

Team Nancy had the valid point that she actively fought back against Freddy. She pro-actively investigated and challenged him while her friends rejected or ignored that they were being stalked.

Team Gale took things up a notch with their presentation. Having baked cookies for everyone beforehand and streamed the event using a selfie-stick camera dubbed “Kenny”, these two took over the whole stage and posed that Gale's take charge attitude and willingness to run toward danger instead of away from it made her the best.

After the video presentations (which gotta say wreaked havoc with my neck as it is a lot harder to watch them when you are actually onstage), Team Thomasin & Team Nancy led the way. Next came the rebuttals.

Having the least evolved Final Girl of the four, Team Sally knew we had to bring it here. Thankfully, we crushed it and made some headway. Again, a lot of it was adherence to the literal meaning of the term – two final girls in Scream, only one qualifying character in The Witch and the fact that Nancy ultimately dies disqualifies her etc – but Tal did slay with the crowd with a joke about Nancy being held back a few grades because canon tells us she was actually a nineteen-year-old high schooler.

The other teams all suitably shot down each other’s arguments, but fortunately the judge came down in favour of Team Sally this round. After the closing arguments, Team Thomasin & Team Nancy were still battling for the top.

Fortunately, there was trivia. Tal had won this round at the previous two debates and I fancy myself fairly knowledgeable so we racked up points here and again got within striking distance.

It all went to hell (for us) during the audience vote though when the crowd largely got behind Nancy & Thomasin. In the end, a tie-breaking lightning round was needed to declare a winner – Team Nancy! 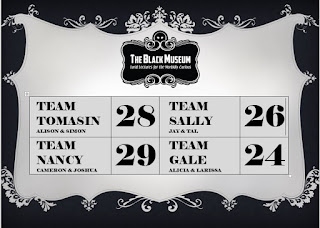 Joshua and Cameron walked away with the coveted Golden Tentacle Trophy and in hindsight, Nancy does seem like the obvious choice. However, I was surprised by Team Thomasin’s game. I guess the fact that The Witch can be interpreted two completely different ways just speaks to how fantastic the film really is.

For me, it was a surreal experience for two reasons. First, I have seen perhaps hundreds of movies at The Royal Theatre, but looking out from, instead of looking at, the stage this time was a trip. I'm glad I had so many facts swirling around in my head that night to keep my anxiety from getting the better of me. Second, it's counter intuitive to argue against films that you adore. Four important titles representing four decades of horror were showcased that night and the debaters were constantly saying “I hate to say this because I love this movie, but…”


At the end of the day, it was fun. I got to re-watch some movies I cherish and also did a lot of book learnin’. I believe the Debate Club will be returning in the Spring and I’ll be there – in whatever capacity – for certain.
Posted by Jay Clarke at 10:00 AM