While at Eyesore Cinema's flea market event last weekend, I picked up this little oddity. 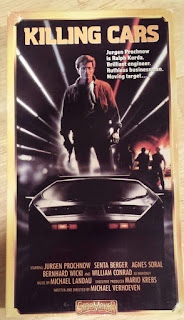 Unfortunately, I later learned it was not about killer sentient cars, or Jürgen Prochnow going around junking said cars...


So yeah, more of an espionage thriller than a horror, but I do like that the first minute of this trailer is basically an eighties music video. What is really confusing is that director Michael Verhoeven's is not related to Paul “RoboCop” Verheoven, but his father was also named Paul and a prolific actor/writer/director in his native Germany. Learn something new every day.
Posted by Jay Clarke at 10:00 AM