Hello all. Here's a super-sized, mid-week edition of DKTM for you. I didn't want to wait until the weekend, as some of this stuff is getting a little crusty. Plus, I've got an Easter greeting lined up for Sunday anyway. So, here goes.
Shaun Gets O'Malley'd.
Here's a cool video that popped up online last week. Scott Pilgrim creator Brian Lee O'Malley made a little sixty-second recreation of Edgar Wright's zom-rom-com classic Shaun of the Dead, in his own inimitable style.

I'd love to see him riff on a few more fan favourites in the future.
Back To The Beginning.
Last month, a new Resident Evil game was announced. Operation: Raccoon City is a team-based shooter that takes place during the events of Resident Evil 2 & 3. However, instead of being in the shoes of the more familiar characters, you will be part of the squad tasked with covering things up. Here below, is a new trailer.

A Picture's Worth A Thousand Incantations.
DirtyRobot sent me a link to this awesome Evil Dead mosiac last week. It is the classic Ash poster, made out of dialogue - more specifically Professor Knowby's transcripts from the Necronomicon - from the film. Click to enlarge, but beware the demons of Kandar should you read it aloud. 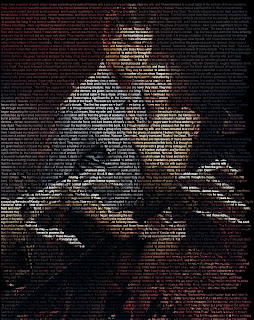 Ah-mazing. I want one!
Room 19.
Drew “Camera Obscura” Daywalt has made several more shorts since I last looked in on his little horror factory. Here’s my favourite of the recent lot, entitled Room 19.

There's A New Show In Town
Lastly, Toronto-based horror scribe Lianne Spiderbaby just premiered her new web show Fright Bytes this week. Along with Jay 3KB (of 3KB.ca), they sound off on what’s new in the genre. Here’s the first episode below.

Schwartz & I tried, without success, to get something like this off the ground about a year or two ago, so I know how much work is involved. Props to Lianne & Jay for giving this a go and representing The Big Smoke.
Posted by Jay Clarke at 12:41 PM