Are You Brave Enough To Book?

Last Friday, I checked out Ghost Stories, a British live theatre show created by Andy Nyman & Jeremy Dyson that has come across the pond and is now playing Toronto.

When it comes to something like this, the less I say the better, but I did want say a few words about it. I thought Ghost Stories was really entertaining. The presentation was top notch and the set pieces were ingeniously staged. The cast was small, which I think added to the intimacy of the affair. I know this isn't unique to Ghost Stories, but a lot of the play's dialogue was tailored to a Toronto audience. It didn't feel forced though, so I thought it worked. 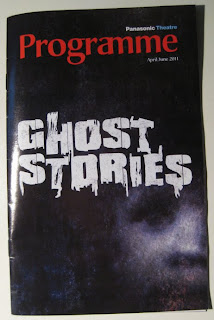 I would have liked to have seen it go a little further with the scares, but there are some really creepy yarns spun, especially the one about the tenth number, as it struck a cord with something from my childhood.

Obviously, the ad campaign focusing on its screaming patrons is perhaps a little exaggerated, but it's still a great night out. Ghost Stories was a wonderful change of pace and highly recommended if it should ever make its way to your town.
Posted by Jay Clarke at 12:38 PM

Sounds really interesting; I hope it comes around me so I can check it out, though I doubt it will.

Obviously, the ad campaign focusing on its screaming patrons is perhaps a little exaggerated, but it's still a great night out.

If you are worried about not having enough scares and screams, I recommend bringing some black chicks with you to the show.

Thanks Anon, I'll keep that in mind.