They Get You When You Sleep!

Last Thursday, I found myself once again at The Bloor to take in another classic as part of Chris Alexander’s monthly movie nights. This time around, it was Philip Kaufman’s 1978 version of Invasion of the Body Snatchers. 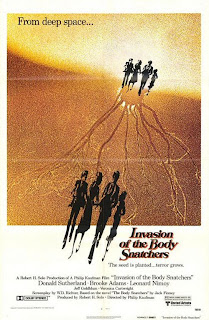 Before the film, Alexander told the story of his first encounter with the film, seeing an ad in the back of a Batman comic at the tender age of five. For me, it was catching a few clips of it in the 1984 horror documentary Terror in the Aisles. Watching the sequence where the dog creature – that just happened to have a human head – shows up was more than enough to hook me.
The print of Invasion of the Body Snatchers was fairly weathered, with pieces of gore and nudity long chopped by some nefarious projectionist, but the sizable audience didn’t seem to mind too much. As is the usually the case when revisiting classics from my childhood, I realized several things that went unnoticed before, the most striking of which being the awesome cinematography. Every five minutes or so, there was a shot that really popped, whether it be something as simple as a camera angle or lighting effect. This film is also full of familiar faces. In addition to Donald Sutherland, Brooke Adams and Leonard Nimoy – inexplicable handwear and all – there was Veronica Cartwright, Art Hindle and Jeff Goldblum. Man, I miss Goldblum. I know he’s got some TV show now, but this guy was the shit back in the day. He was like one of those wind-up toys. Just point the camera at him and let him go!

Continuing the popular trend of genre films of that era, Invasion of the Body Snatchers is also rife with subtext. It is true that Kaufman merely updated what was already there in Don Siegel’s 1956 version and the Jack Finney novel before that, but it still applies just as poignantly. A lot of today’s science fiction and horror is so on-the nose that subtlety has almost become a lost art. And on the subject of subtle, I should mention the score of Invasion of the Body Snatchers. Sure, it has the seventies-style music cues that you would expect, but the film also has several quiet moments. The filmmakers had the presence of mind to know when to shut the eff up and let the movie happen organically.

Like last month’s movie night entry Carrie, Invasion of the Body Snatchers also has one doozy of an ending. What is it with Donald Sutherland and killer endings? What made this screening extra special was that actor Art Hindle was in attendance. He talked at great length before and after the movie about not just Invasion, but all of his genre works, including Canadian staples Black Christmas and The Brood. He was full of great tales, but also seemed a little sad about the state of films today. He said that so many of them fail to even illicit a response in the viewer and the communal experience of film is being lost, due to home theatre. 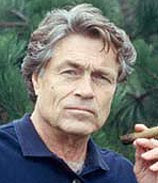 I can’t say I disagree with that, but I would add that the loss is due to the audience as much as the evolution of home systems. Over the years, simple etiquette has drastically changed for the worse. Nowadays, a shockingly high number of moviegoers treat the cinema like their own living rooms by eating noisily, fiddling with their phones and using their outside voices. I can’t say if this loss of respect is due to the quality of films, but it is clear that the magic has diminished, otherwise why would we be so easily led to distraction? We should be immersed in what is right in front of our faces, shouldn’t we?
Sometimes I almost wish for the alien plant invasion. It would certainly make my visits to the local multiplex a lot more peaceful.
Posted by Jay Clarke at 10:04 AM

Hey man - thanks for this great review of my little film club night...thanks so, so much.

Hi Jay,
I enjoyed reading your review almost as much as talking about and watching the film that night with that most appreciative audience...I love what Chris is doing too...bringing these "must sees" to the darkened cinema...The Bloor takes be back to my "nabes" , the local theatres I went to as a kid...The Eastwood (now an Indian Grocery store) the Fox (still there on Queem Street across from the "Goof" restaurant)...
I'm not too old to understand the convenience of home systems,IPads, even movies on your phone (!) But put me in a movie house with a gang of cinephiles and and my smile might distract from the movie!
It heartens me to know there are still people like you & Chris who dig that experience...
See ya in the movies !

It was my pleasure Chris, you keep putting on great shows, and I'll keep making the trek to come and enjoy them!

Thanks Art, it was a great night!