All Heads Half Off!

It should come as no shock to you that one of my favourite slashers is Scott Spiegel’s Intruder. It has always surprised me that a film as significant as this one hasn’t found a bigger audience among horror fans. Not only was it the first project that KNB EFX worked on as an official collective, but it was also because of this movie that producer Lawrence Bender – through his relationship with Spiegel - came to meet Quentin Tarantino. I also feel that Intruder has a lot more personality to it than most slashers, by and large because of Spiegel’s visual flair. 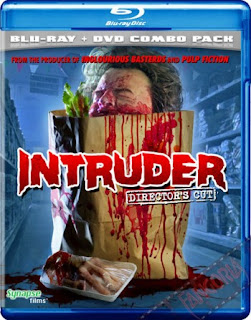 Due to Intruder being heavily censored on its initial release, I have amassed many different versions on a few formats over the years, thus I was very excited when I heard that Synapse Films was releasing a definitive Director’s Cut on Blu-ray. I got a chance to dig into this over the Christmas break, so here is my rundown on the package.
It is safe to say that Intruder has never looked better, as the Blu-ray transfer is quite decent. The fantastic gore effects still hold up and the movie is still as entertaining as ever. I think the highlight is Red Shirt Pictures’ fourty-minute featurette about the making of the movie. It features everyone from the production – save Sam Raimi – reminiscing about their experiences and reveals several things of which I wasn’t aware, including how they got the supermarket location and that Charles Band, of Full Moon fame, became involved along the way. 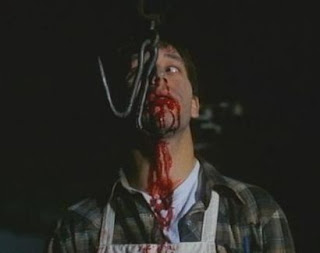 Sam couldn't make it. He got hung up nyuk nyuk nyuk.
Also of note on this disc, are the extended murder scenes from the original work print, as well as outtakes from Spiegel’s 1979 Super 8 short film Night Crew. Like Sam Raimi’s Within The Woods transforming into The Evil Dead, Night Crew was an early version for what would later become Intruder. I was very sad to hear that the full version of Night Crew was lost in the early eighties because I love watching those old shorts from The Renaissance Boys.
The Blu-ray also has a commentary track, which was fun to listen to, but kind of wish Spiegel & Bender had been a little more prepared. Since it had been years since either of them had watched the movie, there was a lot of “Hey wow, I’d forgotten about that”, “I can’t believe we did that” & “Whoa, this is great seeing this again” going on throughout. They also repeatedly dwelt on having to use a library stock score. I feel having a third or fourth voice on the track, like Greg Nicotero or Danny Hicks, would have added a lot to the proceedings. 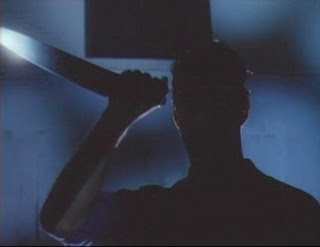 Anyway, this is a great package and the definitive version for slasher fans. As a bonus, I included some old KNB EFX footage below. I’ve posted it previously, but if you haven’t seen it, it is vintage behind-the-scenes of Nicotero and Bob Kurtzman working on the effects for Intruder.
Posted by Jay Clarke at 12:58 PM