Hello, welcome to an all-video edition of Don't Kill the Messenger. Enjoy!
The Infection Has Left The Building.
A while ago, it was announced that Spanish mavericks Paco Plaza and Jaume Balagueró would be splitting up directing duties on the next two [REC] films. Paco would helm the direct sequel, and Balagueró would then follow up with a prequel of sorts. Here below, is the new trailer for the former, [REC]3: Genesis, that Twitch posted a few days ago.

It appears that Plaza is diverging from the tried-and-true POV device which is rather exciting. [REC]2 was a shining example of not resting on your laurels, so I would hope that Genesis continues that legacy.
It Never Gets Old.
Bad-ass Schoolgirl. Check.
Guns. Check.
Zombies. Check.
My Viewership. Check.

Click the cc button for the subtitles.
Rubbing Salt In The Wound.
It is not my intention to depress you on this Sunday morn, but I wanted you all to see this. Recently, Amalgamated Dynamics, Inc - the effects company that worked on The Thing remake - released behind the scenes footage of their creations for the project. You deserve to see what could have been before the studio decided to mask it all with inferior CGI. Click on the image below to be redirected. 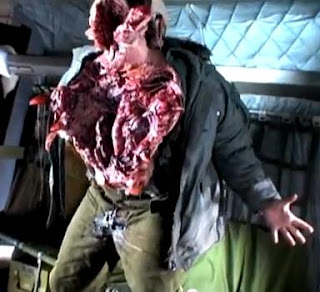