I whipped into Eyesore the other day and grabbed the first interesting looking title I came across, which happened to be Hideo Nakata’s newest The Incite Mill. 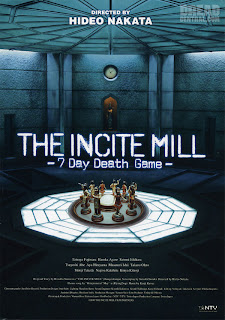 Ten people are recruited for a mysterious seven-day experiment that promises a big payout at its conclusion. All they have to do is survive each other.
For a film that I picked solely on its premise, The Incite Mill turned out to be quite an entertaining yarn. Granted, the Ten Little Indians plot device is one of the most enduring out there, but this had a lot of other things going for it, as well. It wasn't really hard for me to get onboard, as it shares elements with three other films that I hold in high regard, the most prominent being Battle Royale. The flamboyant explanation of the rules and the characters’ gradual discovery of the weapons in play really took me back to that first magical viewing of Fukasaku’s masterpiece. Additionally, the social experiment angle was reminiscent of the 2001 German film Das Experiment and the omnipresent surveillance recalled Marc Evans’ 2002 thriller My Little Eye. 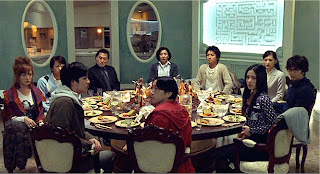 With ten characters to establish, obviously some were more fleshed out than others, but considering there is supposed to be air of mystery to the proceedings I think the ambiguity worked for the most part. It’s a strong ensemble, with the most familiar face being Tatsuya Fujiwara, who also played Shuya in the aforementioned Battle Royale. Perhaps the biggest scene-stealer though, was Guard, the automated robot sentry. His appearance was probably my favourite part and actually made me ‘WTF’ aloud. That was the point I really clocked into the somewhat heightened reality that The Incite Mill inhabits. From then on, I was one hundred percent in. 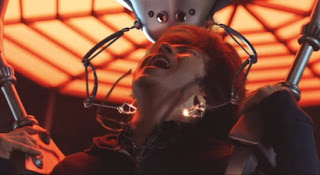 The common problem of Japanese genre films not knowing how to wrap up their films is present here, with some character motivations being a little thin or murky – especially a final decision made by one of the players – but as is usually the case, it’s a small gripe in amongst a wholly enjoyable experience.
The Incite Mill was exactly what I wanted it to be and a best-case scenario from a blind video store rental. If it should someday show up on Netflix, I recommend checking it out.
Posted by Jay Clarke at 6:13 PM