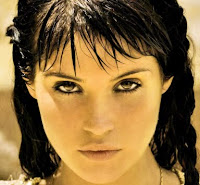 Twitch reported this week that British director Neil Jordan's next project will be of the vampire variety. Titled Byzantium, it features Gemma Arterton & Saoirse Ronan as a mother/daughter pair of roving bloodsuckers. I am extremely excited for this - shocking I know. I loved Ronan's turn as a teenage assassin in Hanna earlier this year, and Arterton completely won me over as the title character in the criminally underseen The Disappearance of Alice Creed. Click here for the original article.
Cabin Fever!
Only of the many projects that has been affected by MGM's recent woes is Joss Whedon's horror project Cabin In the Woods. It has been gestating for what seems like years now, but this week a poster arrived. 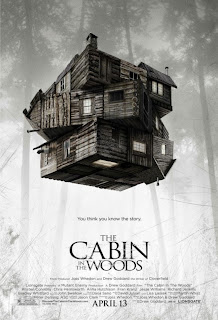 I dig the design for its cool Hellraiser vibe. Cabin In The Woods is directed by Drew Goddard, stars Richard Jenkins & Chris Hemsworth and is scheduled to hit screens (we hope) in April next year.
Onto Park City We Go.

With 2012 almost upon us (IKR?) the lineup for Sundance's slew of films was announced this week. Here below are some of their Midnight programme titles that have me really excited.
The Irish/UK co-production Grabbers has a premise so simple, it's brilliant. A seaside village is attacked by parasitic creatures, for which the only defence is a high blood-alcohol content. Let's hope this delivers on both the comedy and the horror.
I am a huge fan of the tv show The League, so I was very happy to hear about Black Rock. Directed by Katie Aselton and written by Mark Duplass, it features Aselton, Lake Bell and Kate Bosworth on an island getaway gone wrong. I am used to seeing Duplass and Co's boundary-breaking comedy, but I'm interested to see how they'll deal with straight up horror.
V/H/S. Need I say more? This anthology named after our beloved video format features the work of such mavericks as Ti West, Adam Wingard, Glenn McQuaid and Joe Swanberg. I cannot wait to see how this turns out. I am crossing my fingers for something as lovingly authentic as Grindhouse or Hobo With A Shotgun.

Click here for the full Sundance lineup.
Posted by Jay Clarke at 11:03 AM