With January brings a new cycle of Cinemacabre Nights at The Toronto Underground, the first being The Ford Brothers’ zombie film The Dead. I knew virtually nothing about this movie going in, save it being a zombie flick set in Africa, so I was excited to start off 2012 with a bread & butter subgenre. 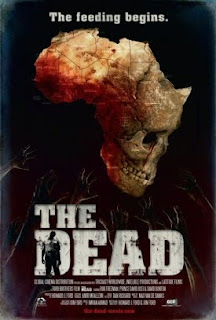 While evacuating from a zombie plague in Africa, Lt. Brian Murphy’s (Rob Freeman) plane goes down off the coast. After washing ashore, Freeman meets an African soldier named Sgt. Dembele (Prince David Osei) and they go about trying to find refuge from the chaos.
My experience with The Dead was a positive one overall. I had heard rumblings of comparisons to George A. Romero’s zombie oeuvre beforehand, but I think it goes deeper than that. Sure, the film is populated with old school, shambling zombies, but the pace and tone come from a different time, as well. I was immediately hit with that feeling of dread and the inevitability of death. I realized that it had been a long time since I had seen that, as most zombie flicks of late are all about adrenaline and/or the easy laughs. I appreciated that immensely. I also very much liked the washed-out look of the film. As I said, Romero gets brought up a lot in reference to this movie, but I think it reminded me much more of Jess Franco’s Oasis of the Zombies – though thankfully this is far superior. 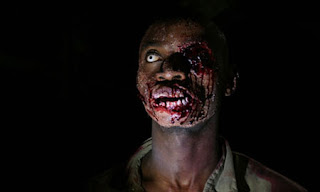 The Dead is built on its two strong leads, and is primarily why it works at all. Freeman had a definite Jeff Fahey vibe going, even if he was a little lacking in the charisma department. I also respect the Ford Brothers for how well balanced the gore was. There were several solid set pieces, but they never ran away with the show and the inevitable CG augmentation was also incredibly well placed. Another thing that brought a smile to my face while watching the middle third, was how much the interactions between the two protagonists – and how they watched each other’s backs – reminded me of playing Resident Evil 5 co-op with my buddy, Phil. 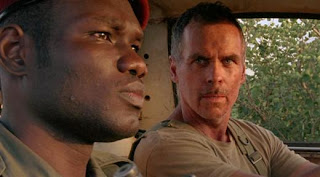 The problem with The Dead is that it reaches its apex about two-thirds in and then festers, inevitably overstaying its welcome. I felt that the filmmakers had a good hour of a film and a final image in mind, but not much in between. Toward the end, there were several logistical leaps – made even more apparent by the drawn out nature of everything that came before it – that really took away from the movie as a whole. By the time the somewhat heavy-handed conclusion rolled around, a lot had been done to undermine all that good work in the first hour.
At the end of the day though, despite some major flaws, The Dead was still better than the majority of zombie flicks being made these days.
Posted by Jay Clarke at 3:05 PM