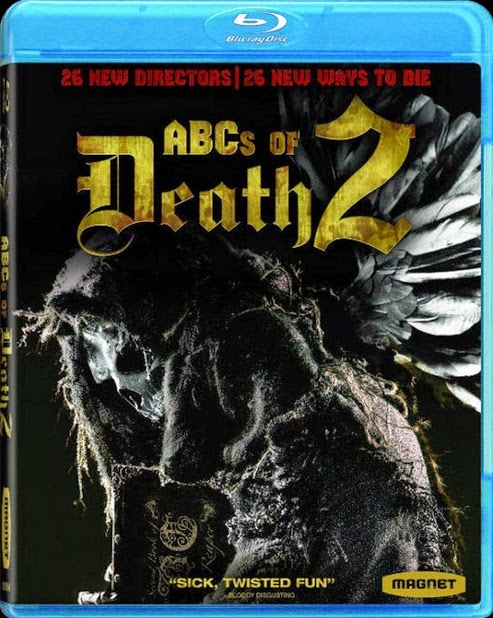 It's a solid package with a lot of content. I was glad to see that producers Ant Timpson & Tim League made an effort to contact all twenty-six directors for supplemental material. For the most part, they were successful as three quarters offer bonus materials of some kind.


I was really happy to see that there were almost a dozen making-of supplementals, including ones for five of my favourites - A, D, S, W & Z.

In addition to the brief EPK vid by AXS-TV, there is also a round of commentaries. Again, Timpson & League wrangled almost all of the filmmakers for these. Though obviously brisk, some are informative, some - like the commentary for B - are playful and some - like the one for K - are downright off-putting.

During the lengthy end credits, Timpson & League go into detail about the project. I was elated that they started off by praising my friend Chris Nash for his efforts and told the story of his inclusion into the project. They also tease of an ABC's of Death 3, for which I will no doubt draft another contest entry.


As I said in my original review, ABC's 2 was far superior to its predecessor, and now it has a nice home video package to go along with it. I feel it is worth owning, at the very least as a conversation piece you can bust out at get togethers - with your cinephile buddies, not tea with your in-laws, unless of course, your in-laws are cool - and debate which is your favourite.
Posted by Jay Clarke at 10:00 AM