Hail To The Chin.

This week saw the release of Bruce Campbell’s third book, Hail To The Chin: Further Confessions of a B-Movie Actor. Campbell describes this autobiography as “Act Two” and picks up where his first one left off at the onset of the 2000's. 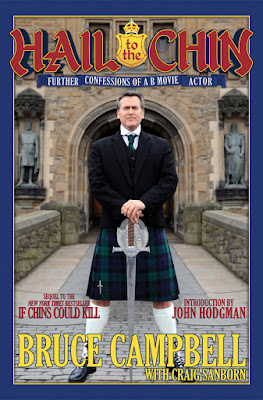 While I think his debut If Chins Could Kill was a little more engaging, as it went into details about his early days with the Renaissance Boys and his rise to B-movie icon, Campbell has much to regale us with from the past fifteen years. I am an avid fan and even I had forgotten just how busy he’d been over the last decade or so when it was all laid out in print. I think my only glaring disappointment was that there were significantly less photos and visual aids compared to his first book.

Hail To The King begins with Campbell's short lived action show Jack of all Trades and then he takes us through the aughts, including his turn as Elvis in Don Coscarelli’s beloved Bubba Ho-Tep, his adventures shooting The Man with the Screaming Brain and Alien Apocalypse in Bulgaria and his extended run as Sam Axe on the USA Network’s spy show Burn Notice. 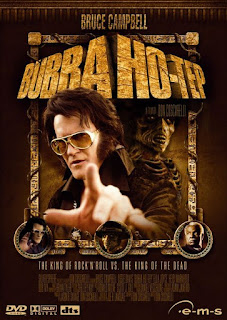 Aside from the broad stokes, he also delves into his continuing cameo work in Sam Raimi joints, using his own property to film My Name Is Bruce and the whack of failed pilots he did in between Burn Notice and Ash Vs. Evil Dead.

I found that Campbell revealed more about his private life in this book. While not all of it is particularly exciting – get ready to discover more than you ever wanted about Oregon – I learned quite a bit about the man. Did you know that he has once arrested for DUI or that he has a side business with his wife harvesting lavender? Me either!

Campbell also spends a few chapters speaking about the business of fan conventions and public appearances. I think this was the part I was most interested in because I wanted to get some insight on just how much of a grind this process can be. I was a party to some really unflattering behaviour toward convention volunteers in the past, so I guess I was hoping for some acknowledgment that it can be tough to always to be “on”. Oh well, maybe he was just having a bad day.


Hail To The Chin was an amusing and brisk read about one of the genre’s most celebrated actors. As his “Act Three” begins, I am interested to see where the Chin grows from here.
Posted by Jay Clarke at 10:00 AM