Peddling of the Dark Wares. 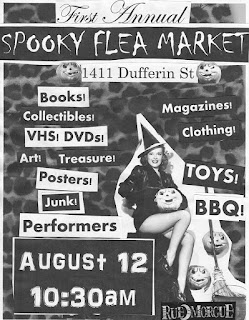 Taking place in the lot outside their offices in West Toronto, this was a terrific event that had a real community feel to it. Even though the usual crowd showed up in force, I saw a lot of the curious uninitiated walking up the driveway while I was there, too. 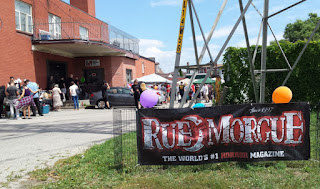 I'm sure they were a little confused when they saw killer clowns rubbing elbows with Jesus as he cooked up burgs and hot dogs on the BBQ, but hopefully they all had a good time.

I walked around for a few hours, caught up with some familiar faces and was pretty chuffed that I only spent twenty-five dollars on some really choice acquisitions. 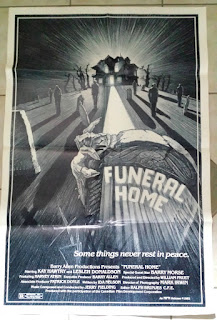 The Funeral Home coverbox - and my pic - don't really do justice to the detailed ink work of this poster. I was pretty smitten when I saw it and the owner, Canuxploitation guru James Burrell, gave me a deal because I had previously written some kind words about one of his publications. Sold. I also picked up a pair of VHS. 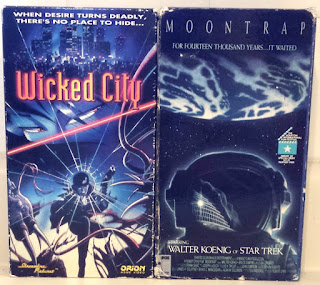 One is an old favourite and other is one of the few nineties Bruce Campbell joints I haven't seen. I could tell early on that this venture was going to be a success, so I hope that it becomes a yearly thing in the future. I'll be there for sure.
Posted by Jay Clarke at 10:00 AM