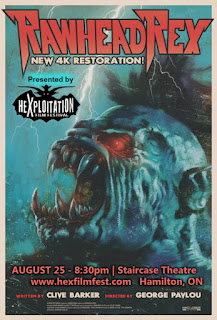 This was a movie I hadn't seen in upwards of twenty-five years (I honestly couldn't remember a single thing about it past the image of the coverbox) so I was interested to revisit it. After seeing it though, I realized I wasn't able to remember it because it's not particularly memorable. Time has not been kind to this movie.

The creature design of Rawhead Rex looks good in photographs, but onscreen he's not quite as magical. There's not a lot of articulation in the face, so the roaring seems almost disembodied at points. Presumably the actor Heinrich von Schellendorf was looking through the neck (if he could see at all) so when he rushed forward the head would ride up. It would be endearing if it wasn't so comical, but the issue is that under the close scrutiny of 4K I can really see how much more personality the designs of Rex's contemporaries, namely The Predator and Pumpkinhead, had. Though in Rex's defense, those other creatures had way better films built around them. 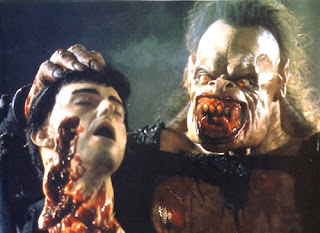 Rawhead Rex is certainly not the worst Barker adaptation out there – we can give that distinction to director George Pavlou's other Barker adaptation Transmutations – but it is certainly rife with miscues. I can see why Barker made sure he got behind the camera for subsequent adaptations of his more signature properties like Hellraiser and Nightbreed. I mean, the movie did have its moments. The rural Irish location set the mood and that stained glass window with the red eyes was pretty bad-ass. Though it seems odd that no one in the parish ever inquired about it. Oh, and Rex pees on a priest.

In addition to the movie, the event had some awesome pre-show vids, including trailers and vintage video from Barker's appearance on the UK talk show Open To Question.


Barker was a boss in this. He spent thirty minutes being grilled by people who just didn't get it, yet remained composed and offered up intelligent and well-thought out responses for every grenade lobbed his way. This was during a pretty volatile time in the UK and he unapologetically stands up for his brand of fiction.


Director Greg Lamberson was also in attendance to give us some insights about independent filmmaking during the eighties. It was a fun night and many more will follow in the Hammer and the HXFF. Stay tuned for more updates as the festival nears.
Posted by Jay Clarke at 10:00 AM